On Tuesday afternoons I spend a little time helping out in the boys' classrooms.  This last Tuesday, I was scheduled to be in Reed's class.  I was waiting for his class in their room as they made their way back from Spanish, expecting a huge smile and a "hi!" from my son.  When he walked in, he was stone faced and somber-looking, and he walked over to me and said, "I don't feel good.  My tummy hurts."

To which, of course, I pulled the classic Mom-line "Do you need to go to the bathroom?"

After peeing (which was, of course, not what I meant), I sat down with him for classroom read-aloud time, and finally felt his forehead.  He was on fire.  Going #2 isn't going to help that - way to go, Mom!

I took him down to the office, took his temperature, and promptly signed him out to go home when the thermometer registered 101.8*.

(In hindsight, I think Reed likely suffered through the morning as I don't think he knew he could tell his teacher he wasn't feeling well.  School is still new and he didn't know what he was supposed to do.  Thank goodness timing was on our side and I just happened to be there when he needed me to be!)

Upon returning home, he promptly laid down on the couch and fell asleep.  Over the next several days, his fever came and went, he struggled with a cough, and he was mighty fatigued.  He's our active kid, so when he stops himself in the middle of play to curl up on the couch to sleep, we know he isn't feeling well!  He did this several times over the course of the next four days. 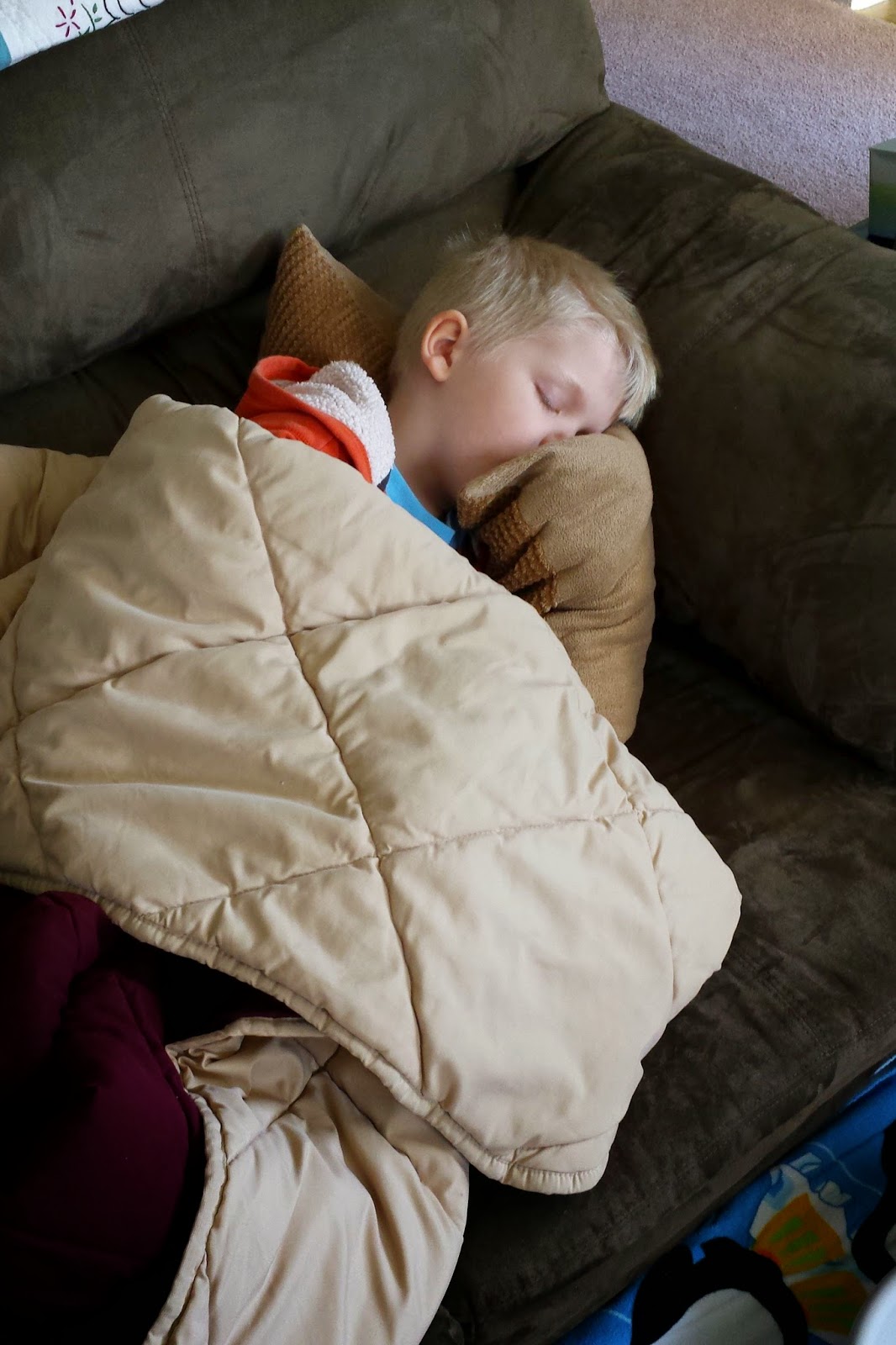 After staying home both Wednesday and Thursday (resting right there on the couch with his favorite blanket, Tigger, and the remote control), we thought he had finally caught a break on Friday morning, when he woke up perky, with no fever, and stating he felt good.  His cough was still apparent, and I told him it would probably be best if he stayed home one more day to rest.  To which he started crying, saying "But I want to go to schooooooolll!!"  Now, when your kid starts crying because he wants to go to school, it's hard to resist.  Likely against my better mommy judgment, I agreed that he could try, but I told his teacher to please call me if he started showing signs.  He made it through most of the day, but sure enough, at 2:00 the school called asking me to come get him.  His fever was back, only 99*, but Reed wasn't looking well.

So back to the couch and naps and TV time for the next day and a half. 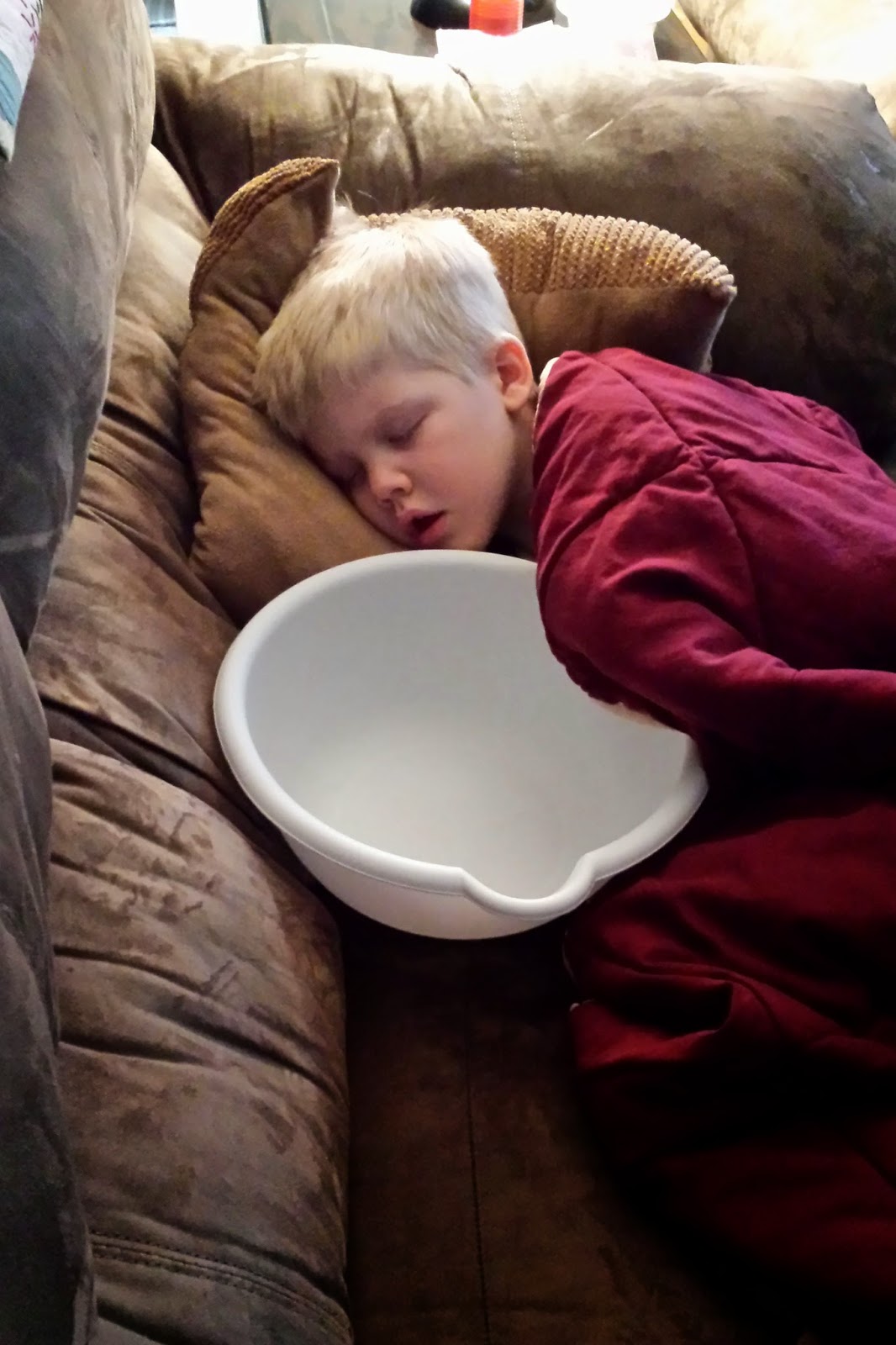 {Not the stomach flu (thank goodness) but the bucket is for the pukes.  Reed can cough so severely that he ends up tossing his cookies.  So glad he's old enough now to aim!}

By yesterday morning, all of his symptoms had subsided with the exception of the occasional (but much less severe) cough.  He wasn't exhausted like the days before but I could tell he was still a little slow moving.  I was cautiously optimistic that by today, he'd be ready for school, which he likely would have been...but then snow, winds, and cold air rolled in, prompting the school district to cancel school by 6:15 last night.

I would've been right.  Had there been school today, Reed would've been there.  When he asked for an egg carton, popsicle sticks and scissors to make a pair of glasses... 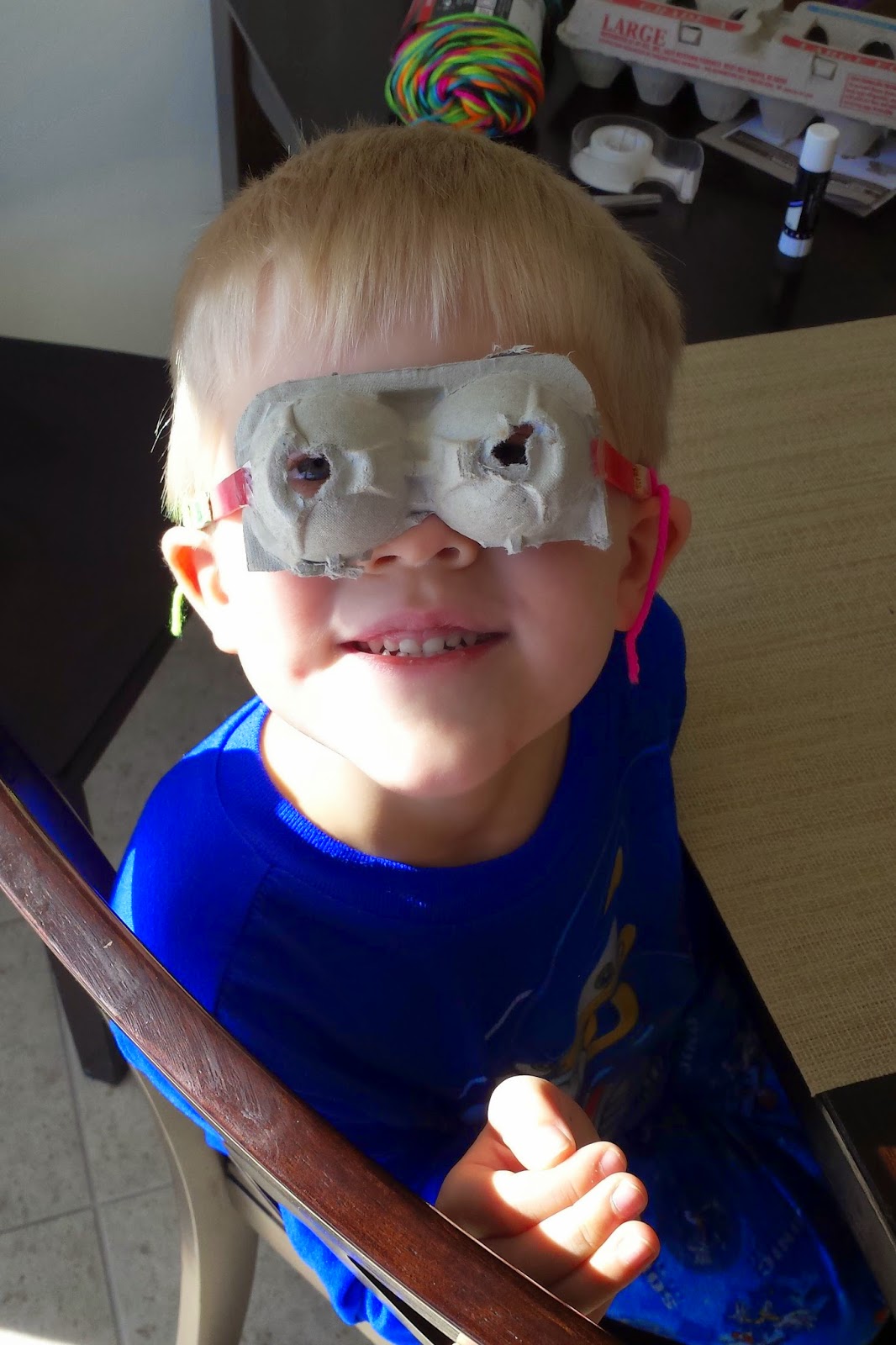