On occasion, Brad has reason to leave us for the weekend.  99.9% of the time, it's for work.  It will usually be from around the dinner hour on Friday to mid-afternoon on Sunday - not at all a long period of time, but long enough, for sure, to manage life around here with three littles all on my own.

They aren't my favorite weekends.

It's hard, and I can have some especially rough moments.  I get by on less sleep because I'm one of those women who doesn't sleep well when her husband is away.  Consequently, less sleep also means less patience, paired with a bit of irritability and a low tolerance for misbehaviors.

Yes, I'm tired, and solo-parenting is exhausting, and I can blame so much of my attitude and mood on those two excuses alone.

I am also distracted.  I am constantly moving.  Always having to be doing something, or at the very least, my mind is swirling with nearly eight million things that I should do, need to do, want to do, would rather be doing, etc etc etc.  I'm mentioned a few times here how my ability to focus and follow-through has been lacking, and my ability to discern and prioritize tasks is especially weak.  And I have noticed, increasingly, that these behaviors and thoughts occur most frequently when I'm doing something with my kids.

More and more, I am taking to heart what every one of the older generation has been telling me since I became a mother: "Enjoy this time.  Enjoy your babies.  It goes by so fast."  Of my many personal goals for this year, slowing down to be with and enjoy my children is at the very top of the list.  Focusing on the fact that they will be this young only for a short while, and that I don't want to miss a thing, will shape my perspective from "busy busy get things done" to "slow down and see".  Gaining control and focus and prioritizing my time will benefit greatly in the long run, in terms of slowing down both my body and my brain and allowing room to focus on my kids.

So when it was needed for Brad to be gone this weekend, instead of dreading and mildly freaking out, I decided to embrace it.  I likely can give a lot of credit for this due to the last minute nature of Brad's plans - his sister was having significant and serious surgery on Friday and it was more than important for him to be there for her and with the rest of his family - so it was decided Wednesday that he would leave Thursday.  This didn't give a whole lot of time to not look forward to him being away.  And considering what Brad's weekend away would entail, he had the tougher job, so my job was to hold down the fort here so he could be there.

So with a better attitude on board, Brad left after I took the kids to school on Thursday morning, and I must've been in a good mood because I allowed this to happen after dinner. 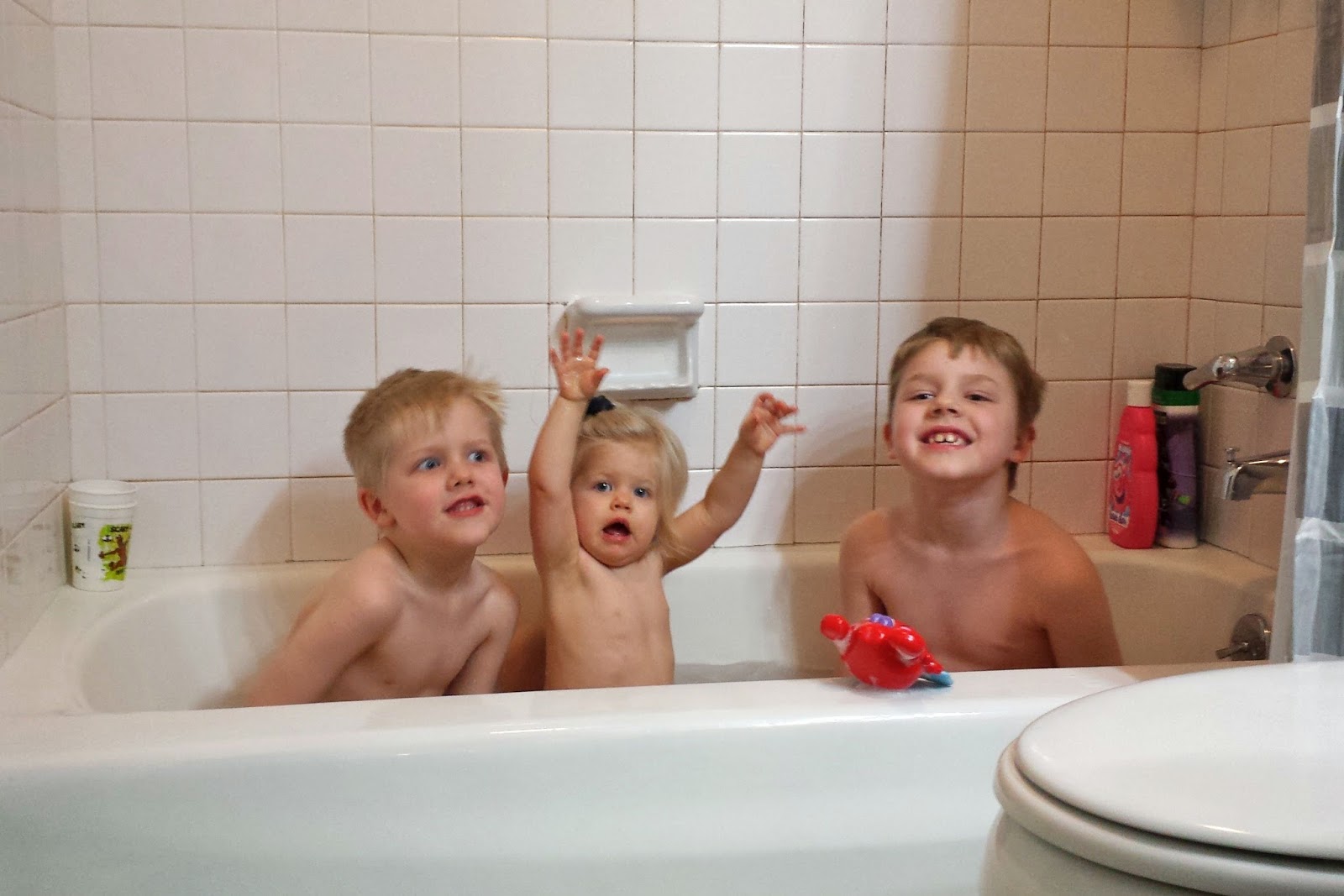 Pure insanity.
It was funnnnnn...but let me go on record to say that that will never happen again. :)

The weekend kicked into gear Friday after school, when I took the kids to the library.  We spent about an hour there before heading over to the mall for dinner, then killed a little time at Target.  Just for something fun to do - likely, more fun for me than for them, but Drew did do a little looking for what he might like to spend some of his birthday money on. 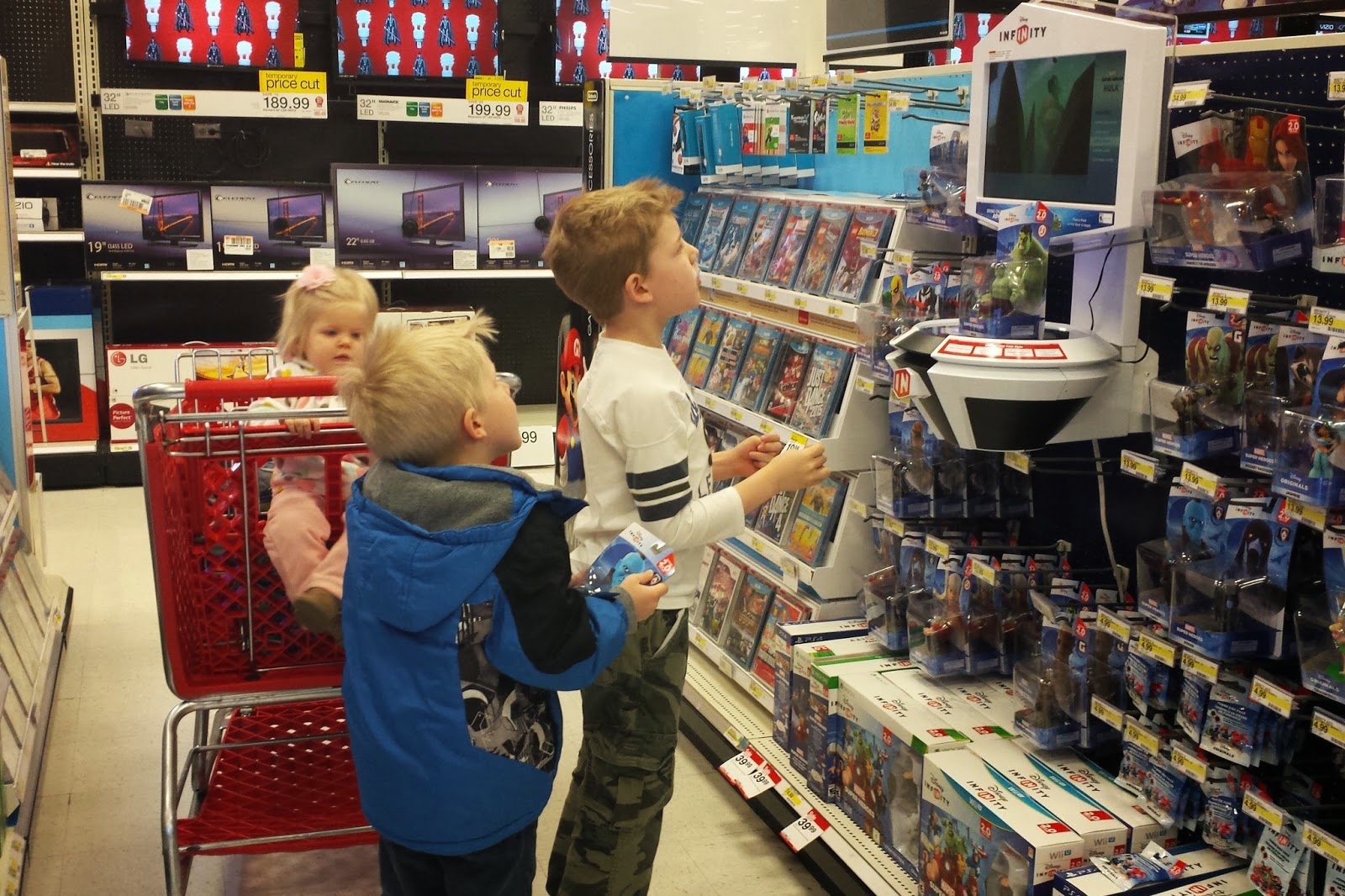 The boys had asked if they could camp out on the air mattress on the living room floor, so when we got home, we got everyone settled and put on a movie. 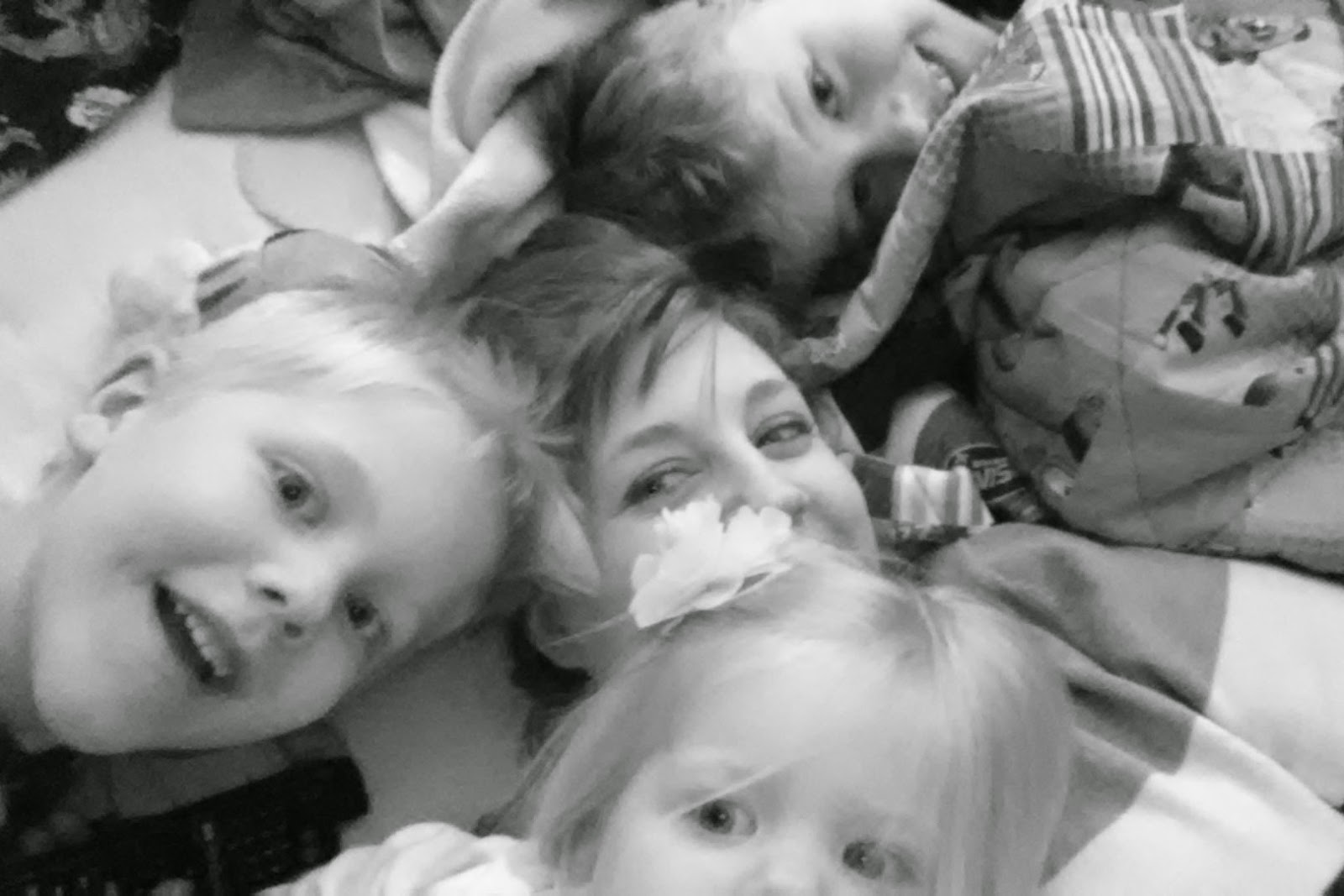 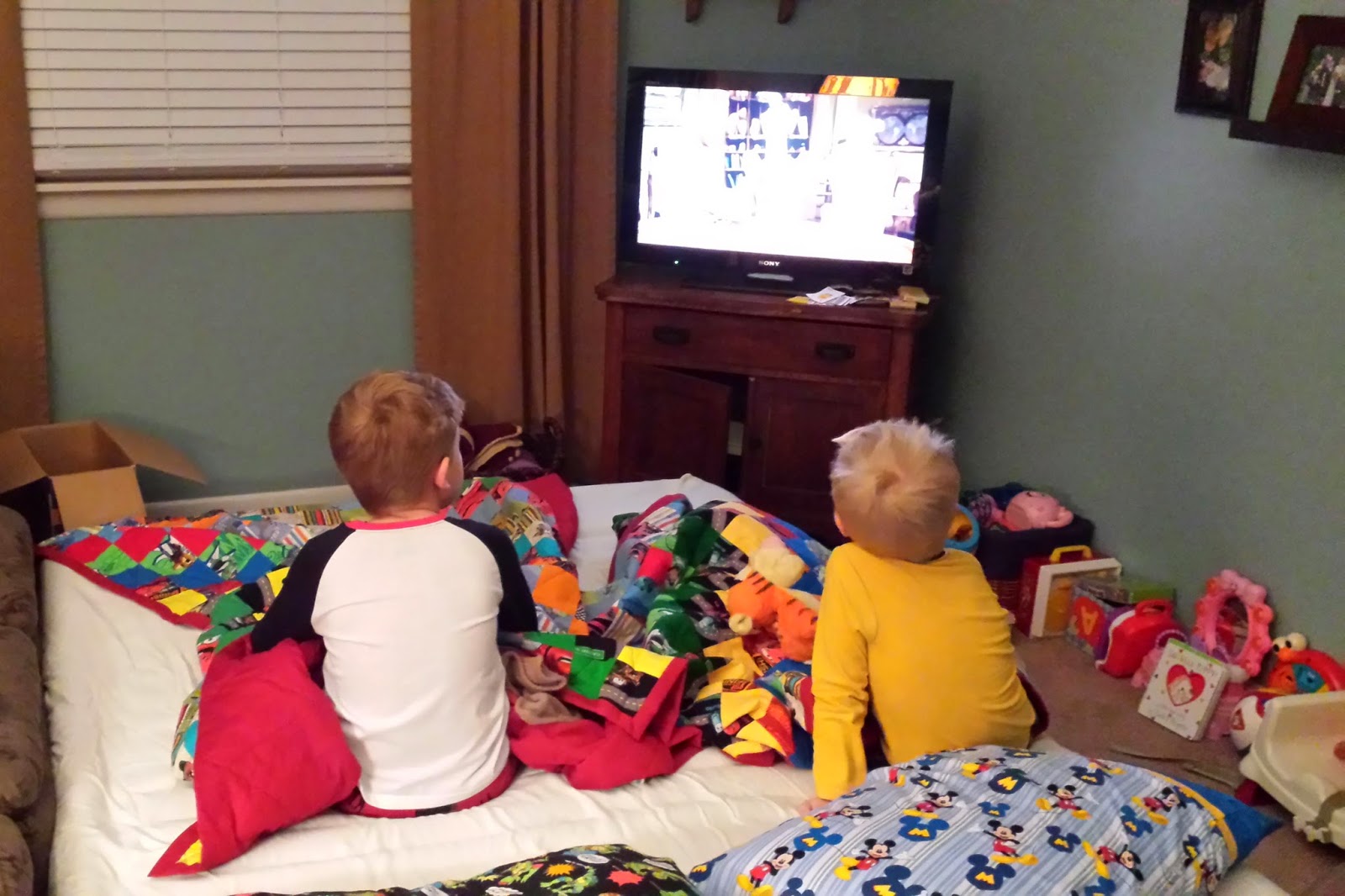 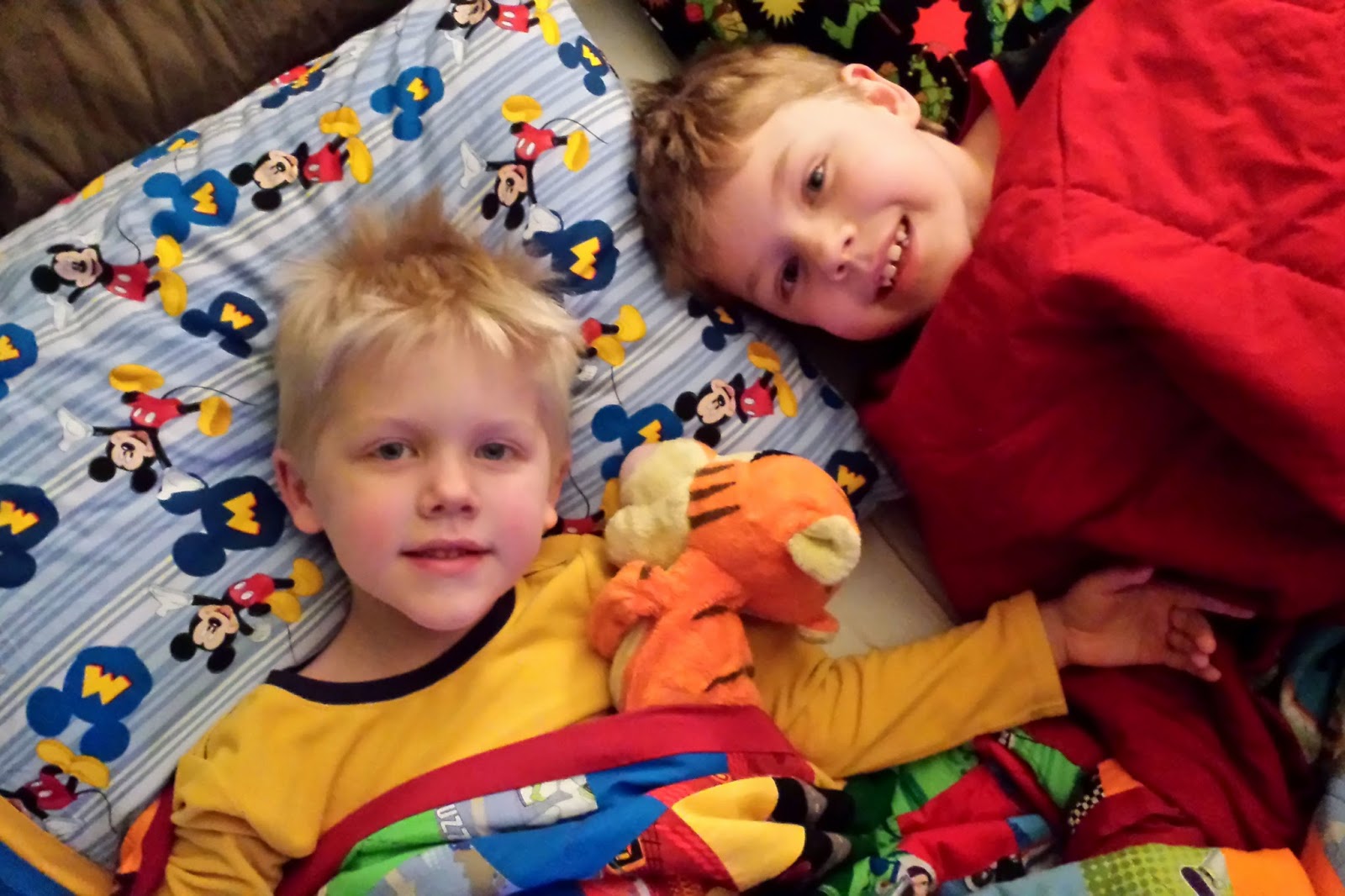 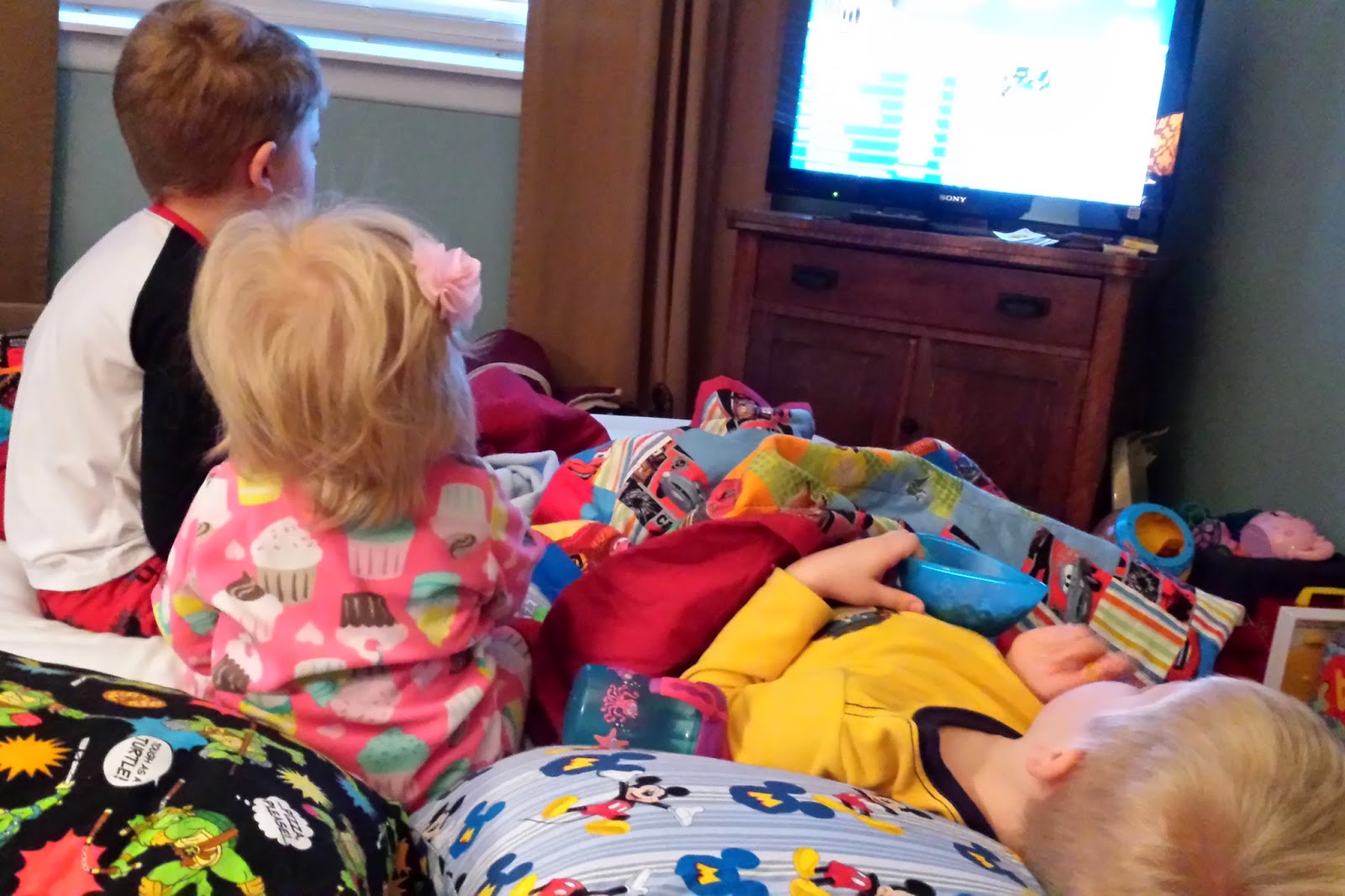 and once Ruby fell asleep for her morning nap, Drew, Reed and I played the Pokeman card game.  (This game is something else - so multi-faceted and complicated and wow is it not intended for adult play.  It's too hard!  But it is also a game that Drew has taken a liking to so for that reason, and that reason only, I'm learning how to play under the condition that I will only play it on the weekends...one game is certain to last over an hour!)

One of the activities I had in mind for us to do to keep our hands and minds busy on Saturday was to work on the boys' Valentines for their class parties.  So after lunch we set to work (more on their Valentine's in a later post). 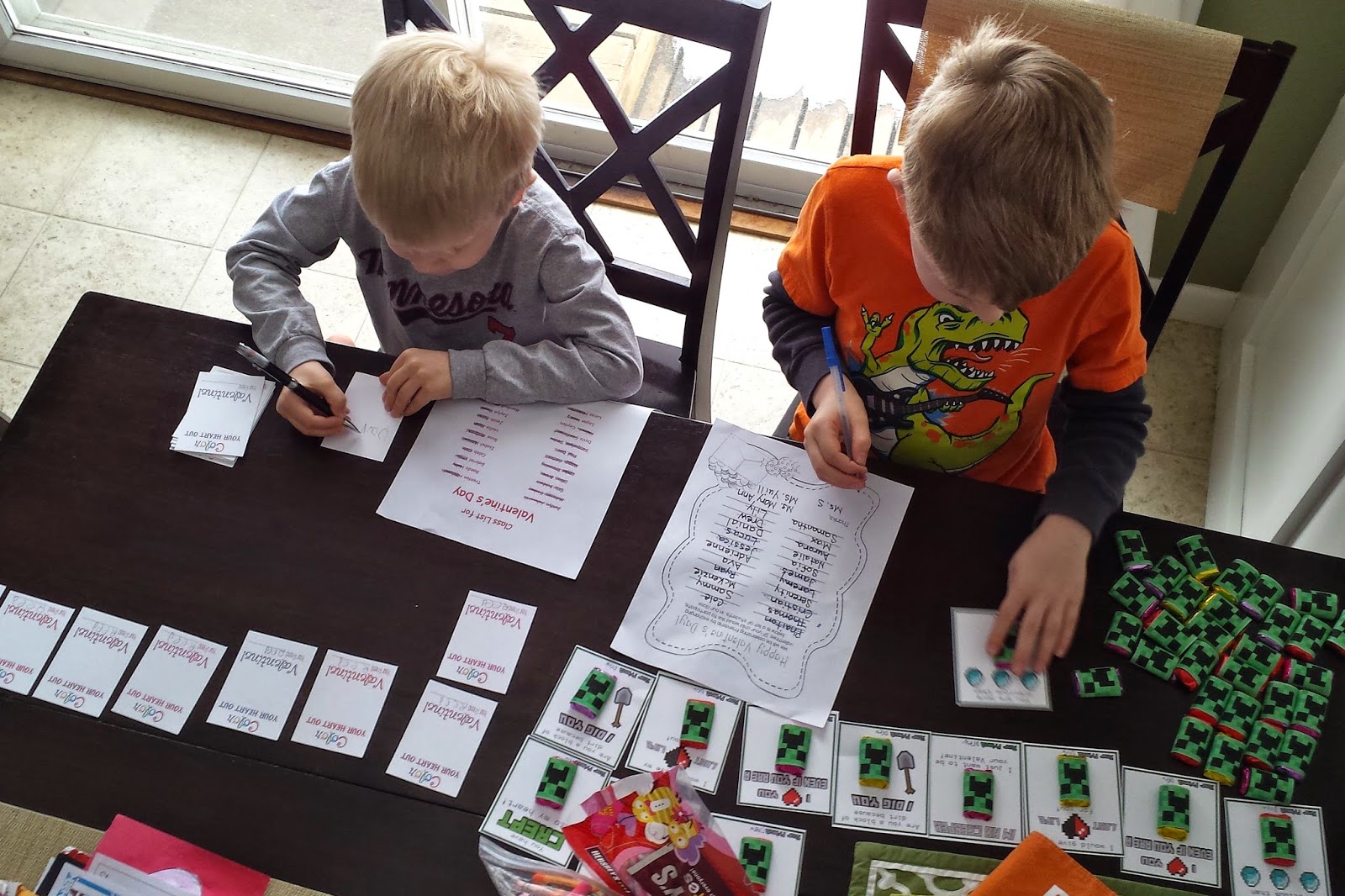 The rest of the day included another movie (the boys couldn't agree on what to watch so they each watched their own, one upstairs and one downstairs), general play around the house, some quiet reading time, our usual Saturday night pizza picnic, and another campout on the living room floor. 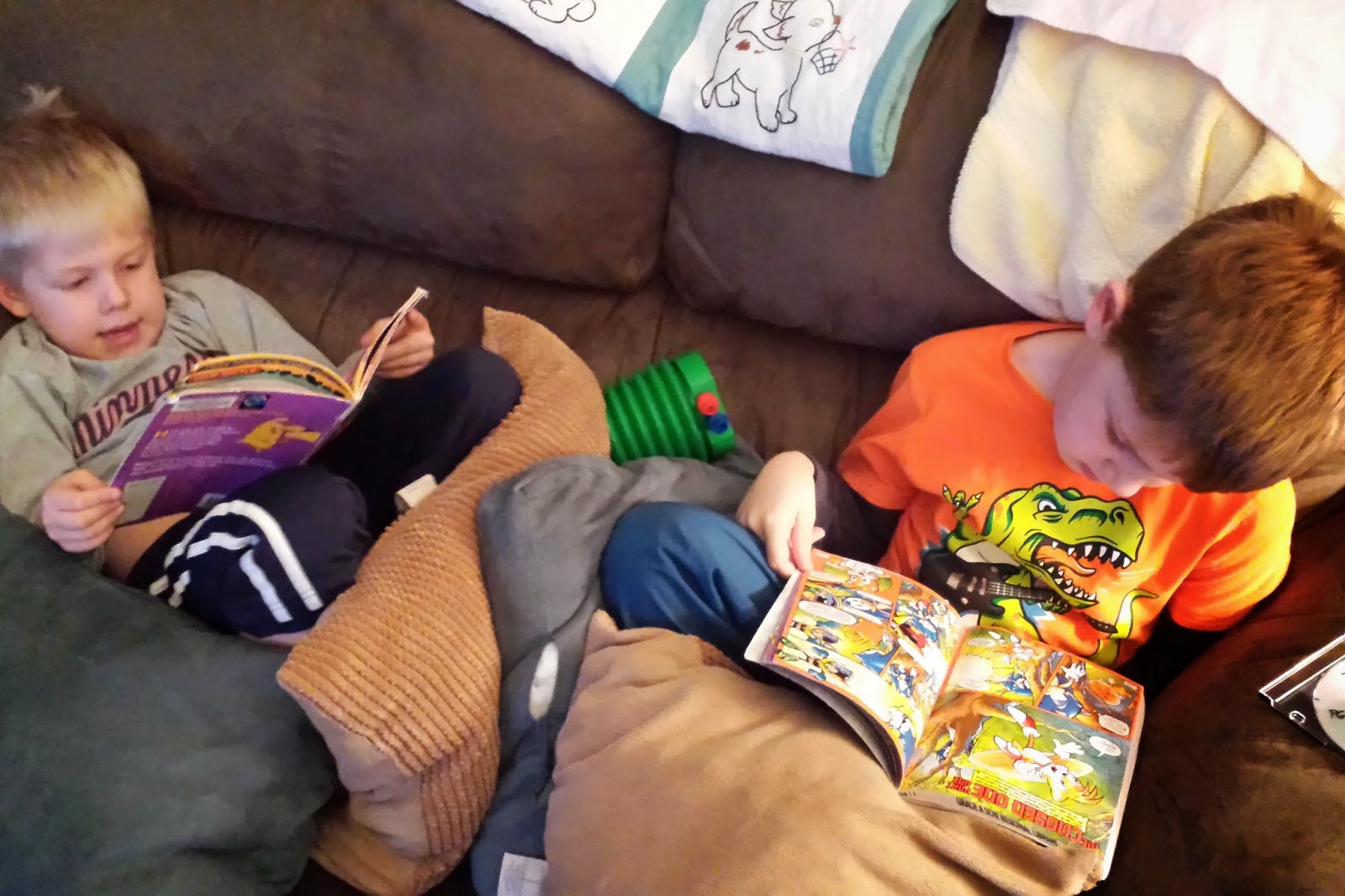 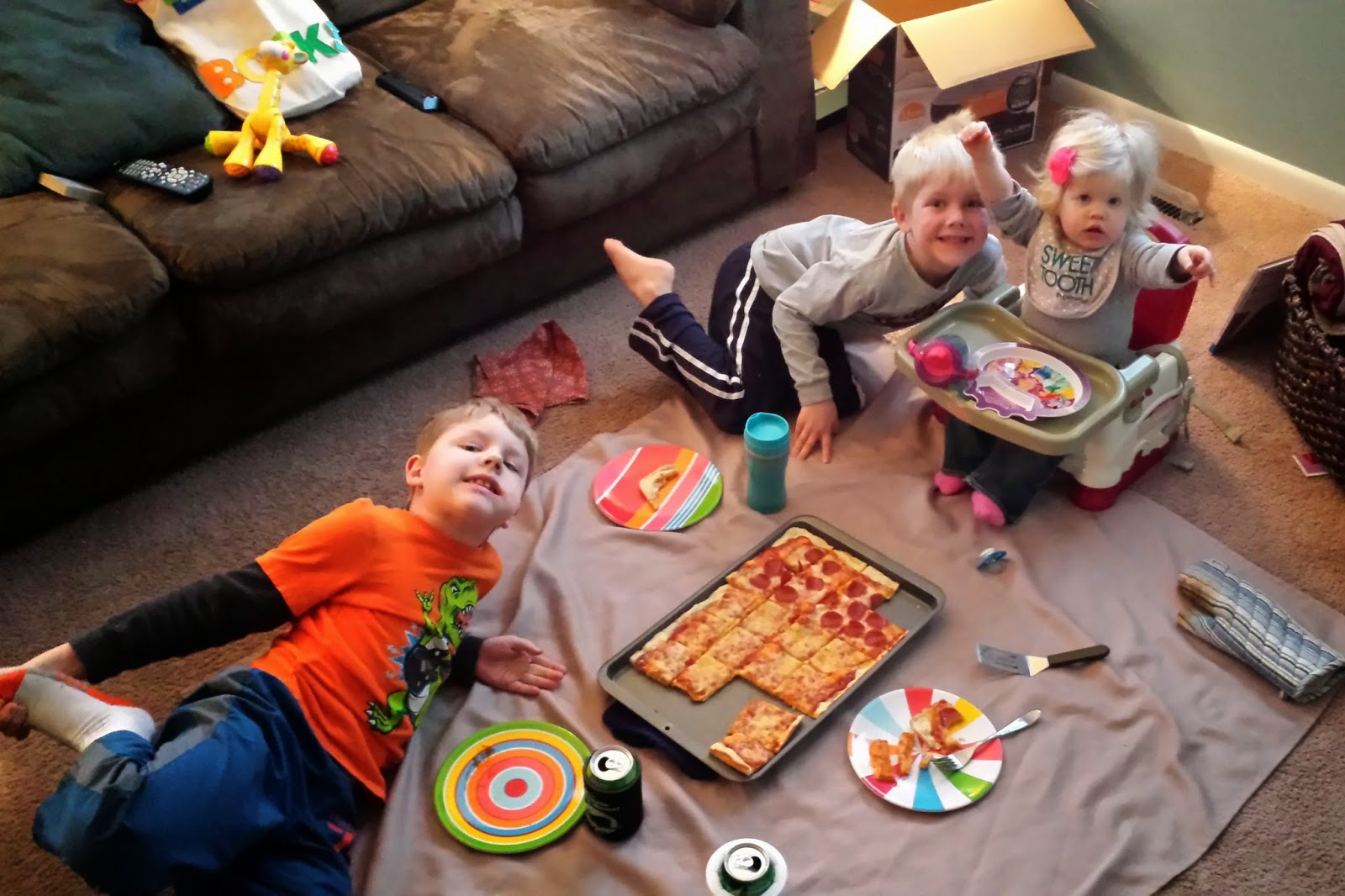 Sunday was pretty usual, too (church, lunch, Skype with Grammy & Papa, play).  I had sugar cookie dough in the freezer (made in December but never baked into Christmas cookies) so we decided to make Valentine's cookies. 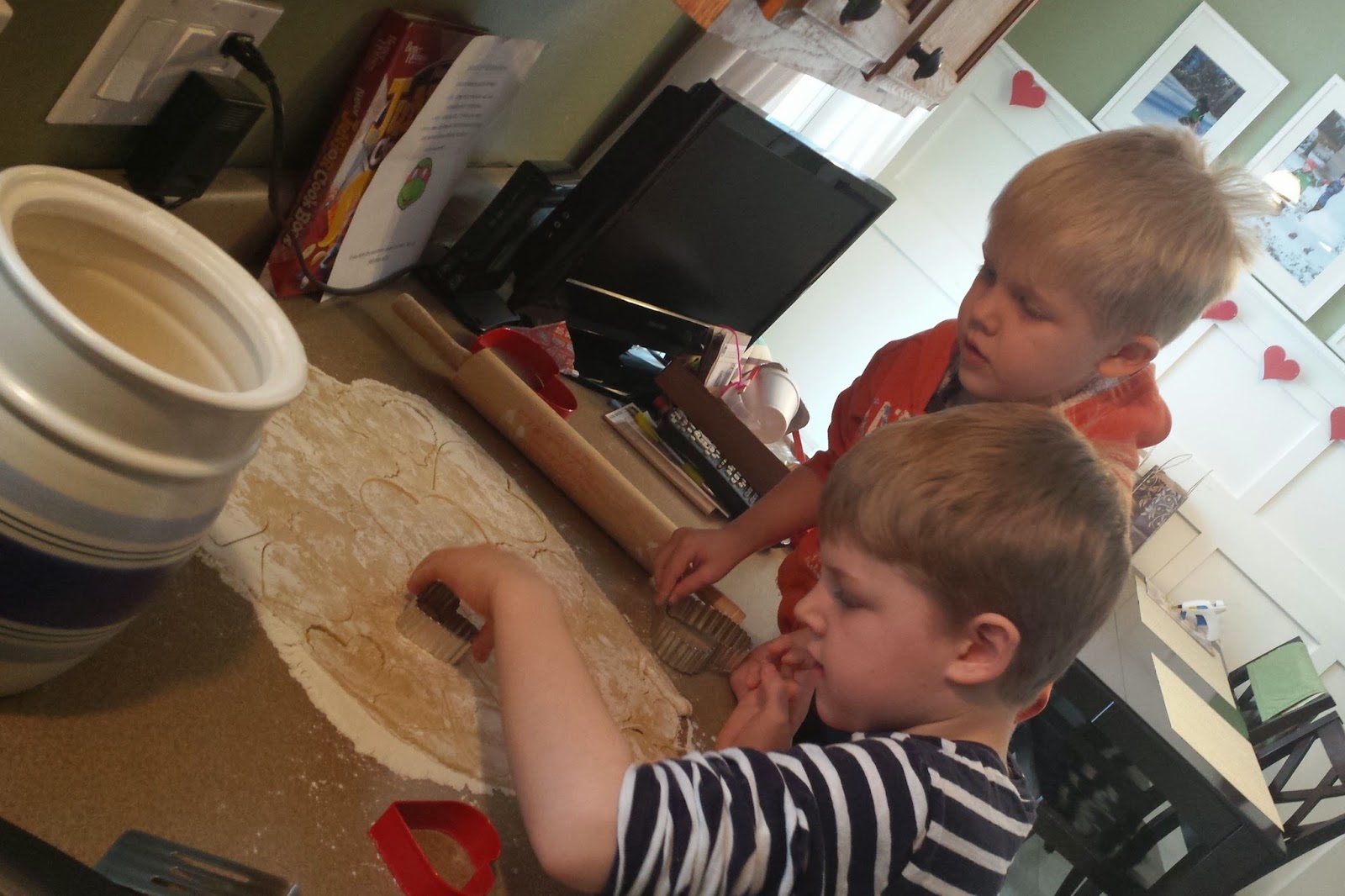 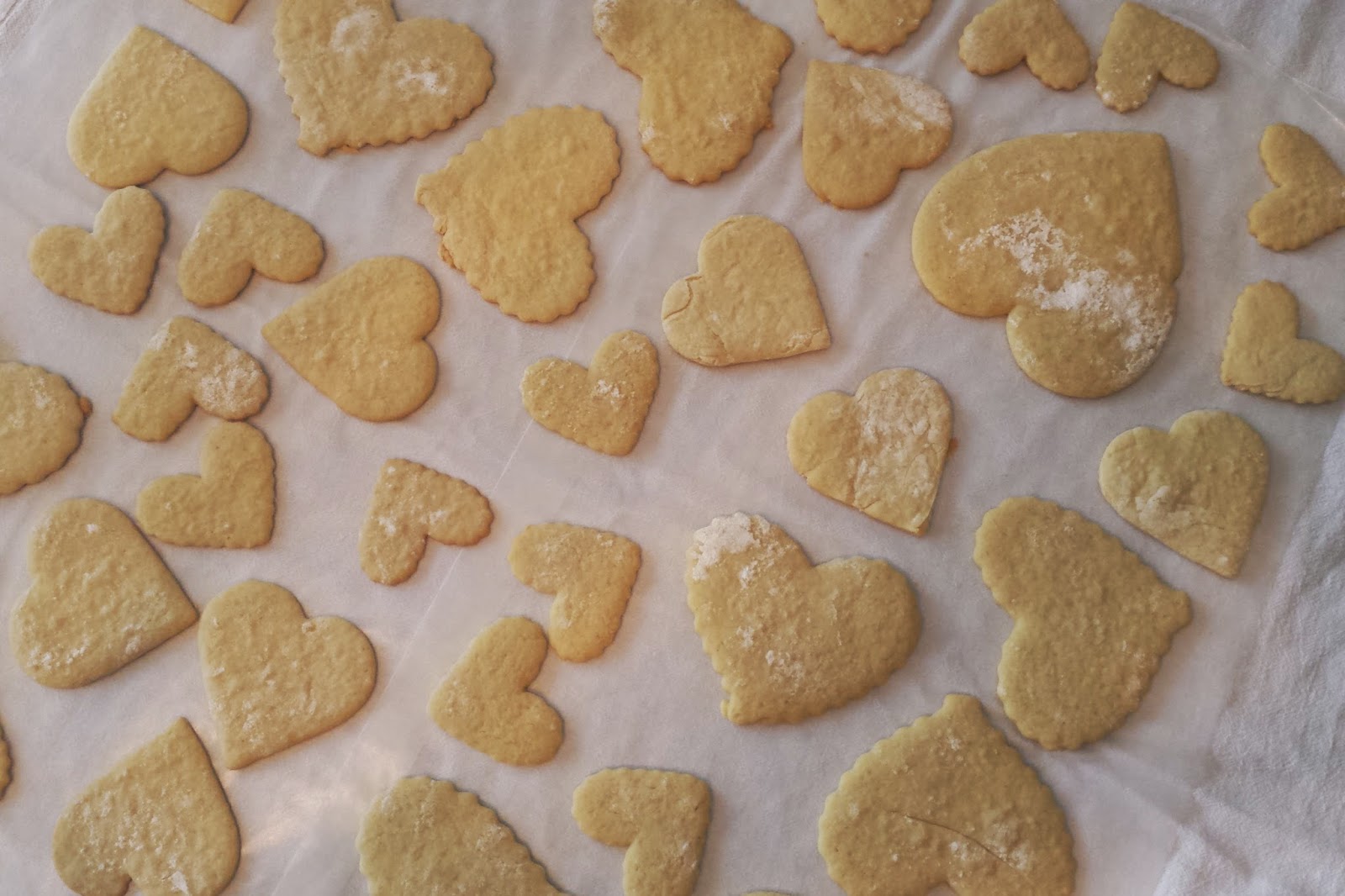 I texted this photo to Brad and said "I'm totally rocking motherhood right now.  Orrrrrrrr I'm incredibly stressed and need to eat my feelings.  You decide."  ;)  {The cookies were later frosted and adequately sprinkled.}

Boredom clicked into high gear late afternoon, and arguing between brothers ensued.  And more arguing between brothers, and then even more arguing that it about sent me over the edge so video games were revoked until they could be kind to one another and each boy was sent to their separate corners to just be quiet please for a little while!  *whew!*

Back to school yesterday for the boys and usual tasks for Ruby and me as we anxiously awaited Brad's return last night.

All in all, we had a pretty great weekend.  The boys and I had a few *moments* but they were not unlike any such moments we'd have if Brad were home.  The boys are very much in the throes of "being brothers" right now, so there is much to be disgruntled about (in each other, according to each of them).  The tasks of parenthood and the managing of three kids can get a little hairy when doing it solo, but it's totally do-able.  With flexibility and cooperation, the four of us got done what we needed to get done every day.  But it's the job of doing the actual parenting that gets wearing and tiring and difficult when I have to do it on my own.

Needless to say, when Brad comes home, we're all very excited to see him. 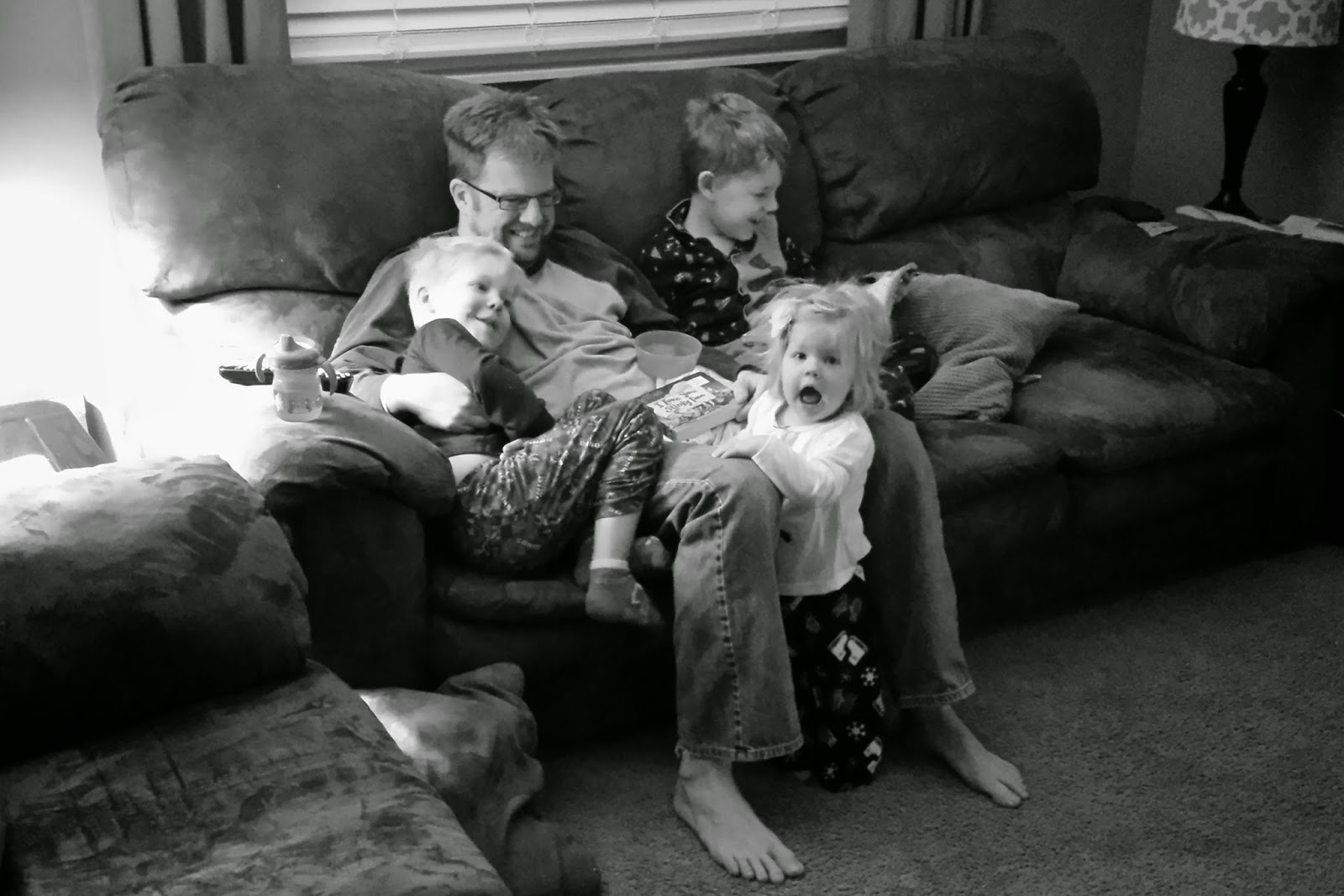 All of this to say... my kids are awesome.  And I will miss this time so, so much once it's over.  And while solo-parenting is exhausting, when I just slow down and breathe and decide to foster a positive attitude instead of a dreadful one --- things turn out alright.

And thank God for my husband!  While I believe that if, God forbid, I'd have to do this single parenting thing permanently, I would do well... I'm grateful every single day that I don't have to.