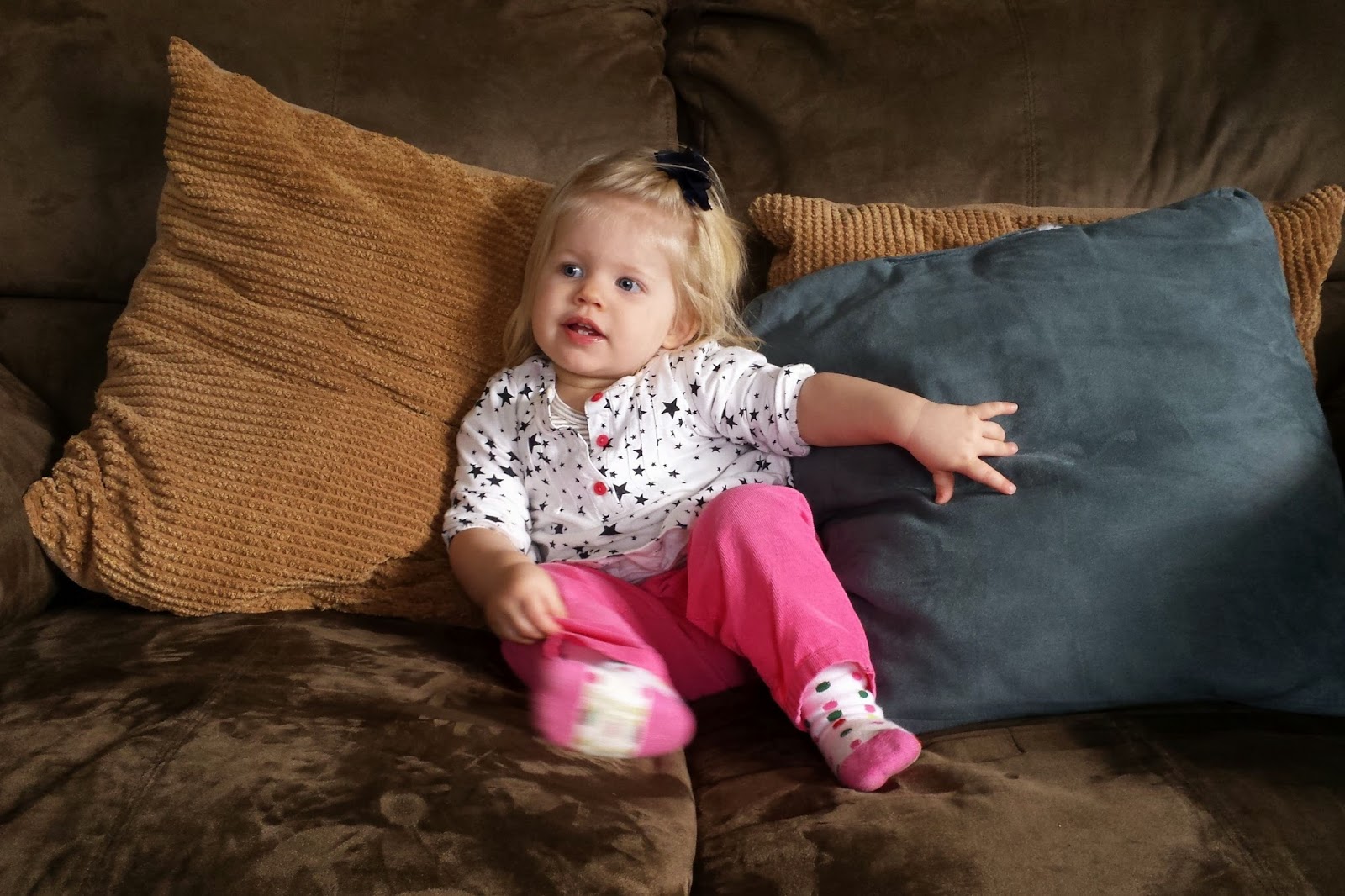 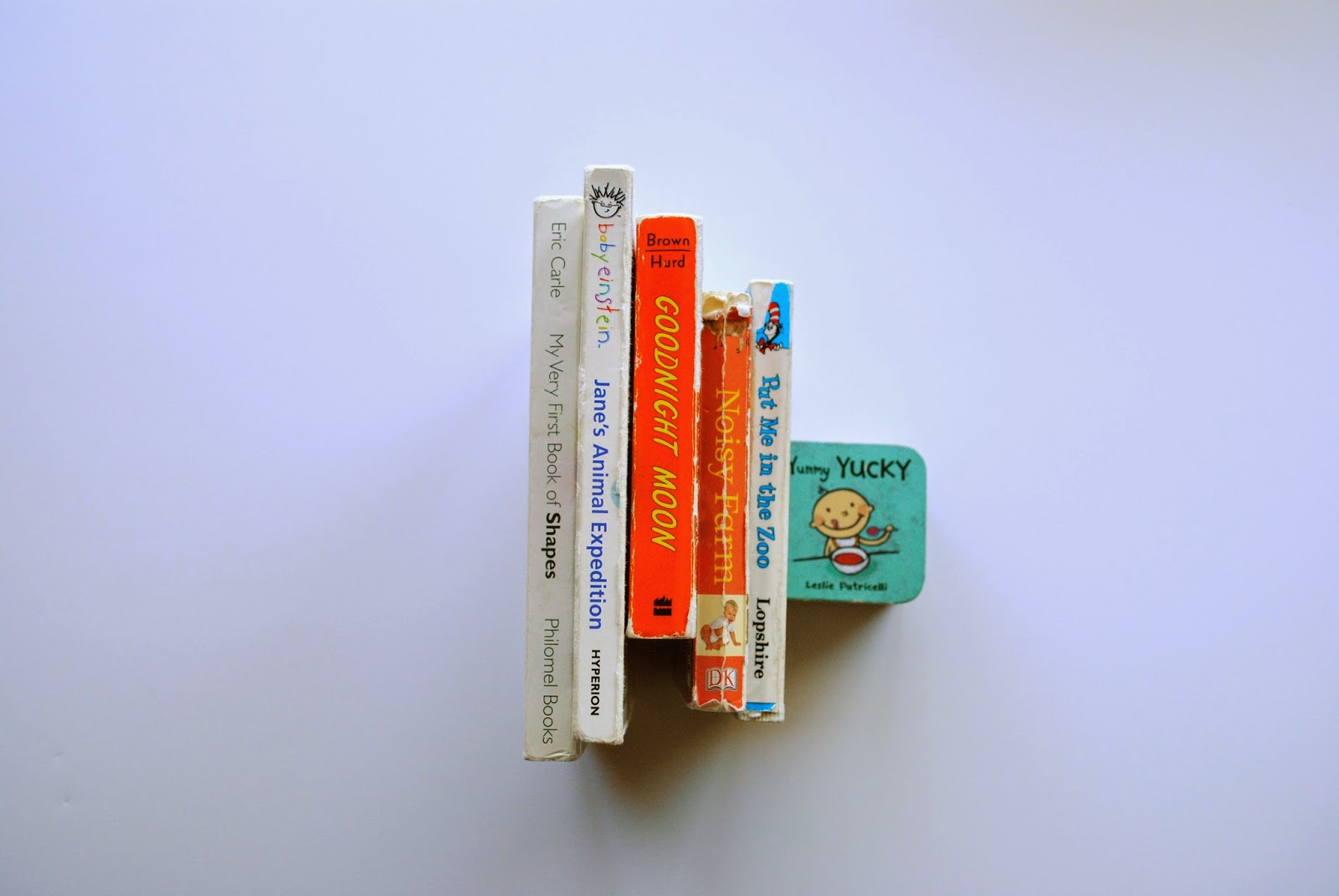 "Reading" on her own.  In recent days, we've seen her make herself cozy with several books within reach, sitting quietly as she thumbs through each and every one. 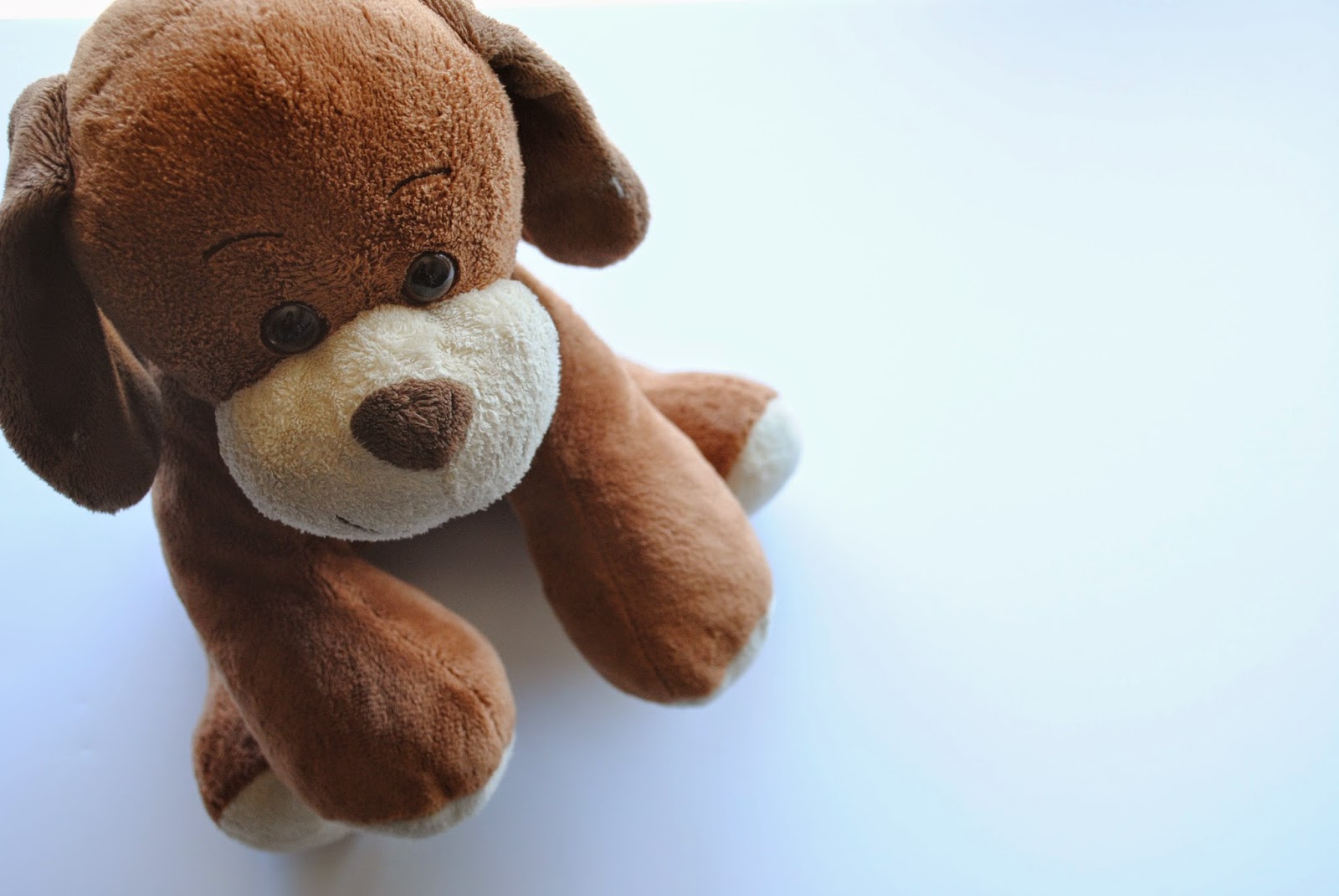 Playing with Bubba, one of Drew's favorite stuffed friends. 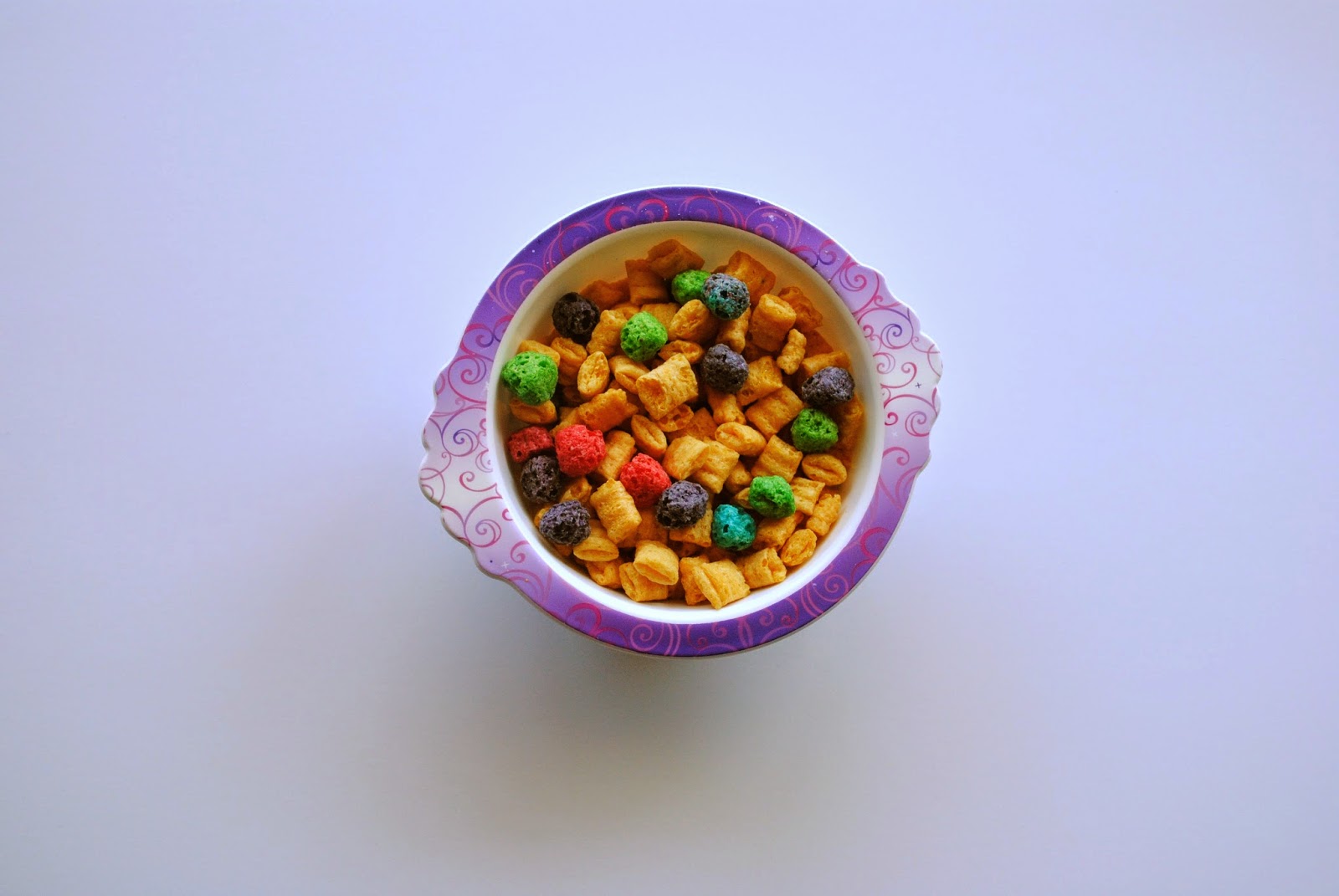 Eating Cap'n Crunch, both peanut butter and berry varieties.  I made the "mistake" of giving her a few along with her Cheerios...there's no going back. 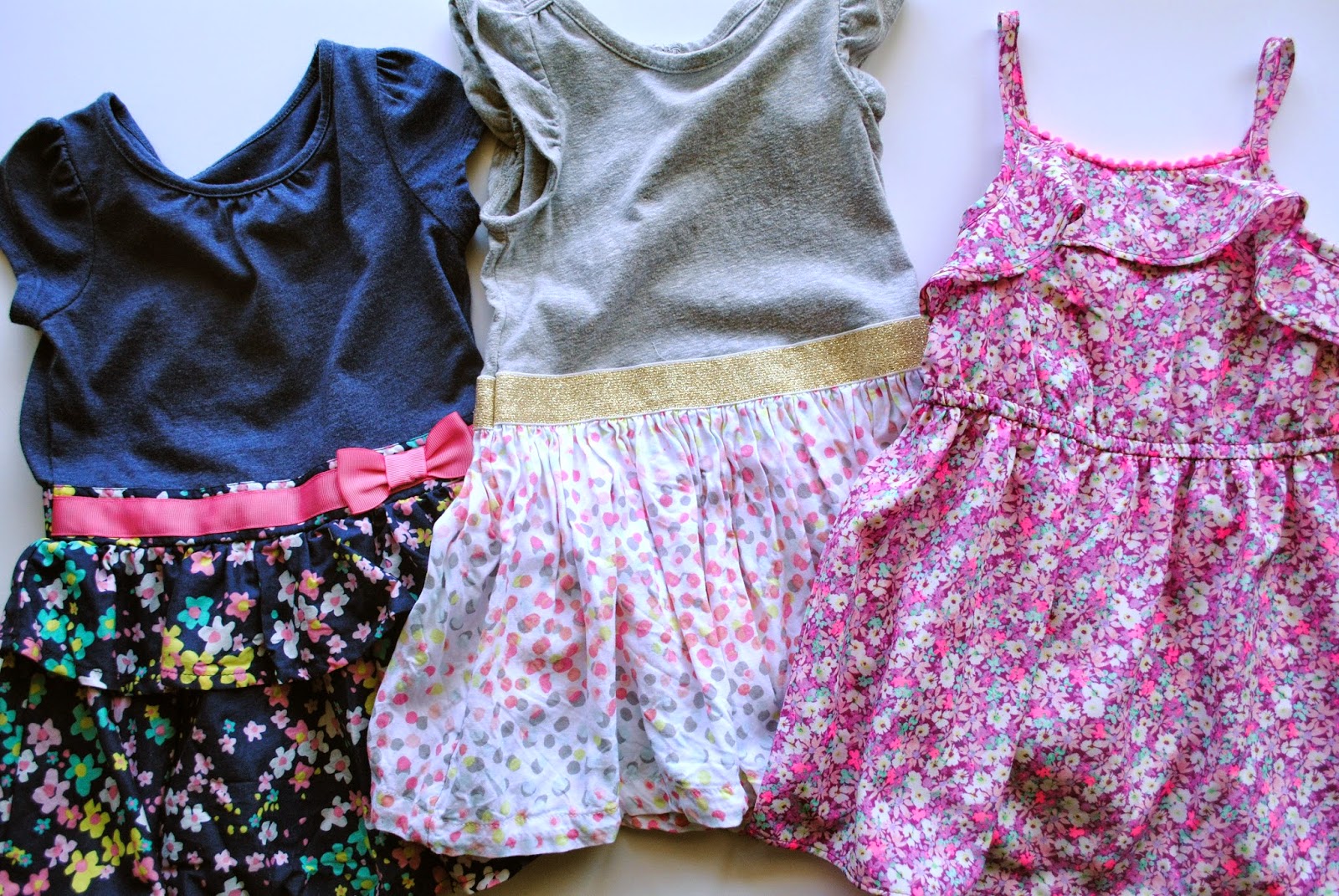 Wearing spring dresses from Target.  We haven't exactly has the spring-y-est of weather yet, but I've broken into her spring wardrobe as much as I can because I couldn't stand to stare at these just hanging in her closet anymore!  They're even more adorable on. ;) 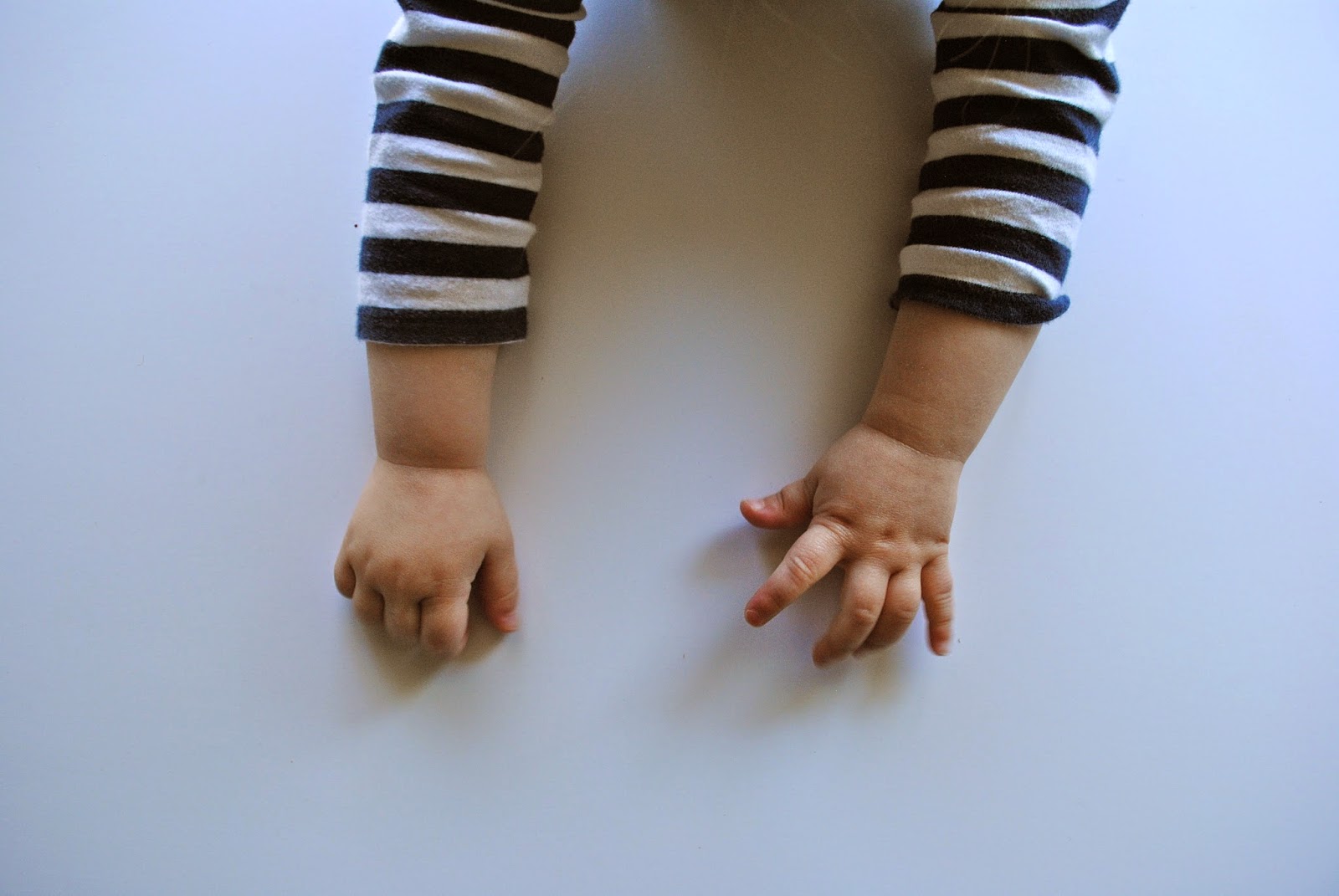 Learning how to tickle.  And boy is she good! 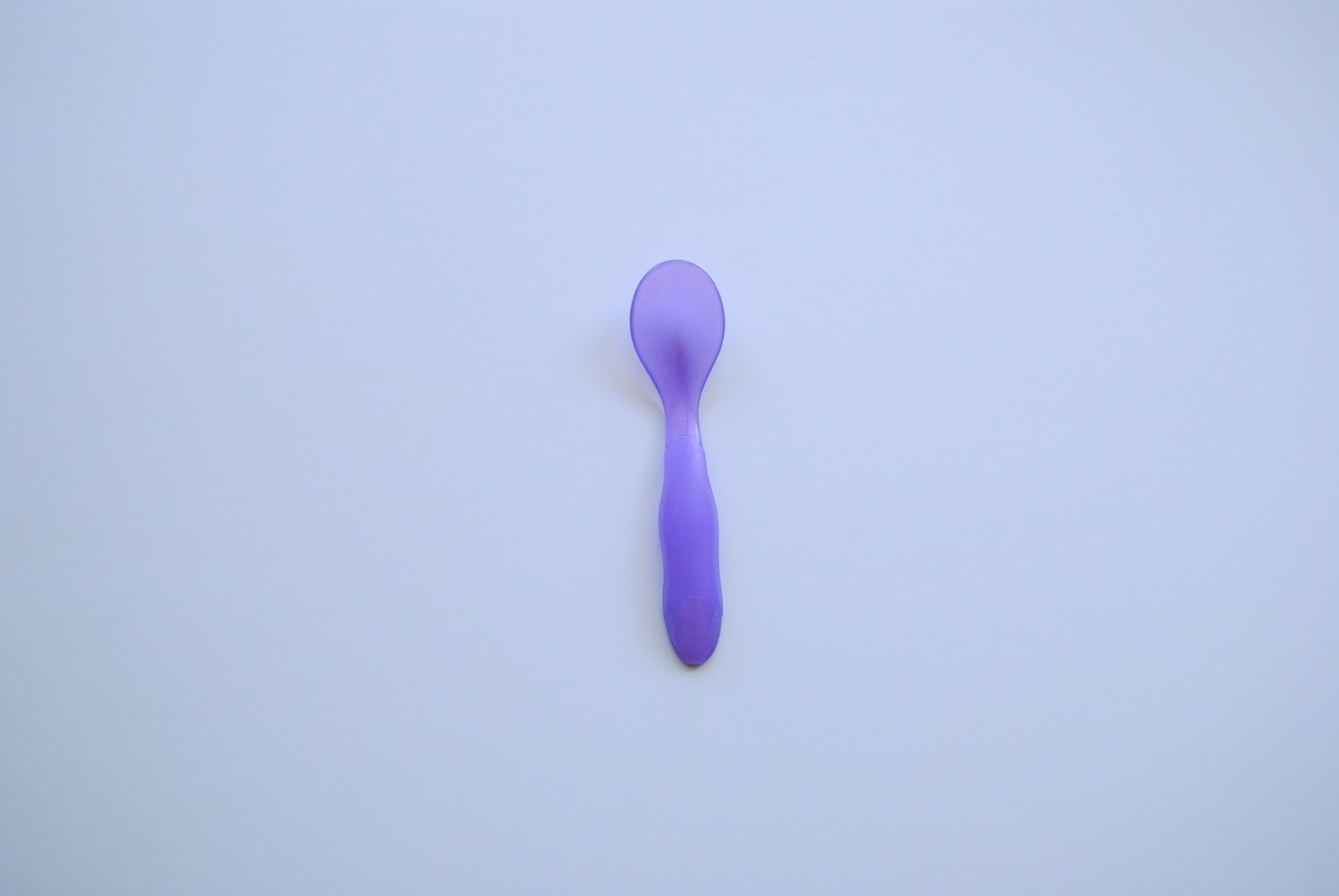 Working on using a spoon.  She's interested, at times, to do it herself, but usually she'll still dig in with her hands.

Teeth!  In the last couple months, four new teeth have appeared, including her first molar.  She has coped with it really well so far.  She has had a few fussy nights when she'll squirm and cry 3-4 times, sometimes requiring some cuddling and rocking and other times just needing her pacifier.  And now that I mention that, it occurs to me that she has been wanting her paci more than usual throughout the day, as well.

And, she has learned how to climb up onto things; namely, the desk chair in the boys' room, and the shorter stools we have in the basement.  She tries to get herself up onto the couch, but has to resort to "asking" for some assistance.  And of course she doesn't climb up to sit down - she climbs up to stand up.  Obviously.

I think I've shared a few times about how vocal Ruby is.  She makes a lot of noise. ;)  Because Reed required speech therapy when he was little, I admit I'm a little hyper-vigilant about Ruby's word count.  I don't even know where she "should" be in this department (so hard to remember from when the boys were little!) but if she'll be able to talk with real words as much as she mumbles and grumbles and points and moves, then whoa baby!  This girl is gonna have a lot to say!  So far she says (consistently) "Mom" "Daddy" "Urray!" (which is "Murray" from Sesame Street) "Bubba" (see above) "hi" and "ba!" (with gusto and a wave for "bye") and "yah" (for "yes" or "yeah").  I'll say certain things with a certain intonation or use a sing-song voice, and she'll mimic the sound, occasionally catching a few letter sounds, too (like "all done" and "night night").  And she continues to work on her animal noises: "ooo" (moo) "ack" (quack) "aaah" (baa).

She's revealing more and more of her little personality.  Let's just say she's a bit spunky!  Sassy and sweet and so, so funny.  This girl - I like her a lot.