Drew & Reed Go to the Doctor 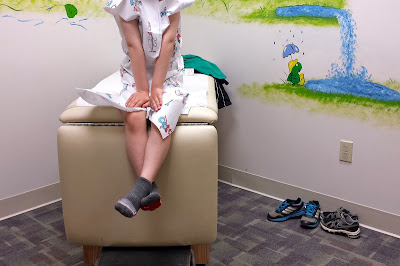 For no other reason than to record the facts.

All of these numbers are settled within the 75th to 85th percentile range.

We've been a bit concerned about Drew's ears (read: his hearing) lately as he very frequently employs the word "huh?" after almost every phrase or question spoken at him.  He has very waxy ears, so it occurred to us that perhaps he was plugged.  Rest assured, his eardrums are clear.  So this just means the kid doesn't listen.

Reed is currently the victim of spring allergies, and has been since we've moved to Michigan.  Regularly dosing with children's Zyrtec should help.

Also, very routinely, Reed suffers from a cough that can be so significant it wipes him out.  In trying to play back to the doctor the accompanying symptoms and duration of these fits, I learned that I need to be a better record keeper of these things.  In any event, he isn't the "classic case" for anything, but perhaps he has something like occasional obstructive airway disease or something else big and fancy sounding.  She even mentioned asthma.  A pulmonary function test (to be scheduled) will help determine the current state of his lungs and if they are at all to blame.

Overall, both boys are healthy and strong.

And both boys found those paper gowns equal parts hilarious and humiliating.