One of my favorite things about motherhood is watching my kids play sports.  I love my soccer mom status.  I do.  And one of my favorite things about sports at the boys' ages is that it is relatively non-competitive.  The focus is mostly on learning the fundamentals of the sport and engaging in fair play and practicing good sportsmanship.  There has been, of course, the exception to the rule - the one dad who is too intense or the one kid who takes it all just a bit too seriously - but all in all, our organized sports involvement has been positive.

We try to encourage the boys to try new things, in all areas of their lives, which includes sports.  This is really Brad's bag - he's a sports nut {I'm fairly certain it's a requirement in order to be a Vander Waal man}.  Here in Midland, there seems to be a lot of opportunity to try a lot of different activities, and we try really hard not to over-schedule either the boys or ourselves.  Brad enjoys coaching and, at this point, both boys prefer for him to be their coach, and he can only do so much as far as organizing and leading practices and games.  More importantly, it's really important for the boys to not be overwhelmed or overstretched.  So one sport/activity per kid per season (if even that much) is how we've been managing that so far.

Little League is one sport that we were excited to see the boys try.  There is a bit of a learning curve to the ins and outs of the different sports and community organizations, and last spring we missed the registration deadline for baseball.  It was a bummer as Brad felt like Drew was at just the right age to begin (Drew did participate in a brief tot t-ball league back in Pekin in 2011 which was super cute and fun but it wasn't something that we maintained as we transitioned to Minnesota and then again to Michigan).  So we waited for the year to pass, had the League's registration dates on the calendar for this year, and when the time came and we asked Drew if he was ready to sign up...

It's really hard for Drew to try new things - especially things that he doesn't think he'll be good at or things where he could potentially get hurt.  The older he gets, the harder it becomes.  We did our best to encourage him to try.  Certainly, we were not going to force him into it (that never turns out well) but we don't want him to be so shut off from trying new things that he misses out on something that might very well be something he's really good at, or, even better, something that he ends up really enjoying.  We encouraged him to try, and if he didn't enjoy it, he wouldn't have to do it again.  Simple as that.  Well, he thought about it a lot, and I think he really really really didn't want to, but there was enough of him that was curious (and he had good odds that one of his buddies would wind up on his team) that at the very last minute, he decided that yes, he wanted to play. 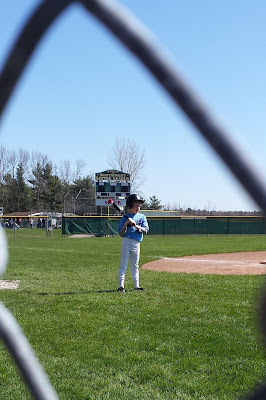 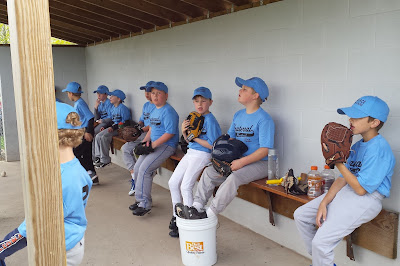 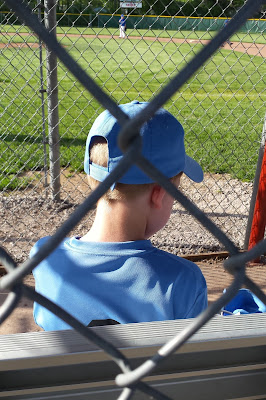 Brad signed on to be a coach and ended up with 11 boys on the Northwest Little League's Wallace Landscaping sponsored team. 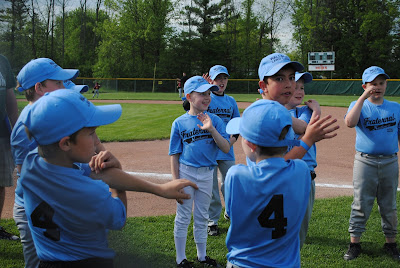 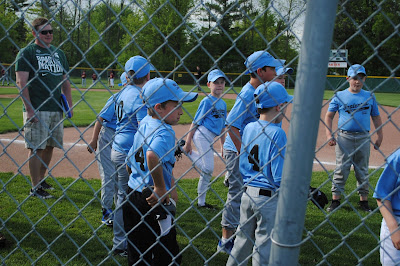 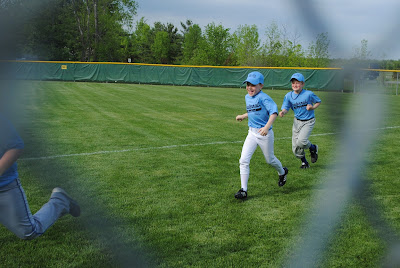 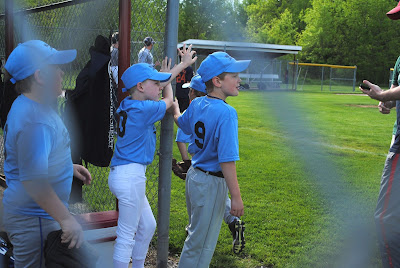 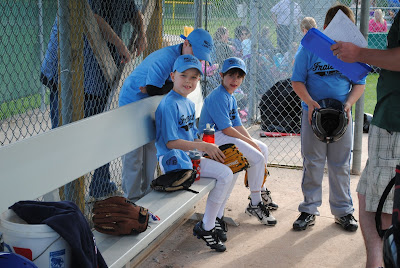 The season lasted all of May and into the first part of June, finishing up last night with their final game. 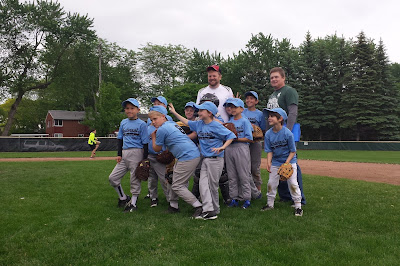 Typically, three nights each week was devoted to baseball - either two games and one practice or one game and two practices.  {We ate a lot of hot dogs and cold meat sandwiches for dinner on those nights!}  We had a wide range of talent and ability on our team, ranging from kids who had never played before to kids that play on traveling teams.  Drew's age group is also when the kids first begin pitching.

And, most important for me as a parent - our team had incredibly supportive and encouraging parents.  There was one dad would could be a little over the top with his own kid, but overall, we had really great adults surrounding our team.  So many of the dads (and some moms) helped out at practices and they all stepped up to help game nights run smoothly.  For our first Little League experience, I was really impressed by and really grateful for that. 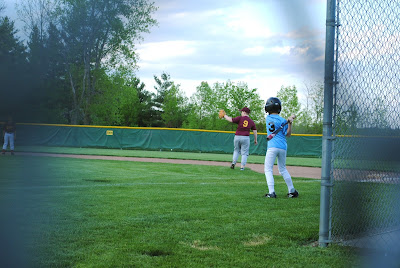 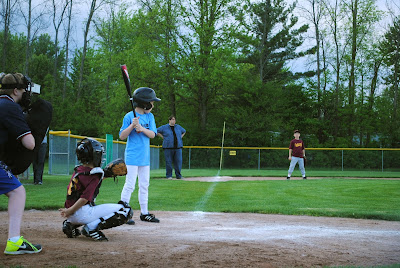 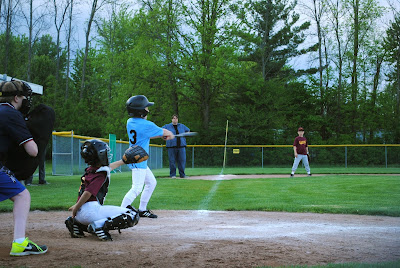 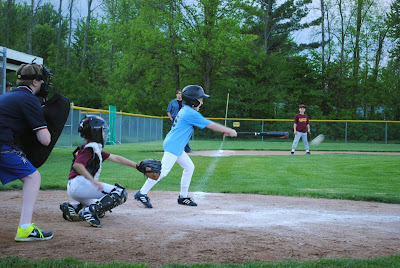 All in all, I think it was a good experience for Drew (I hope it was!).  He got one hit and was stellar at defending first base, getting at least three outs there. 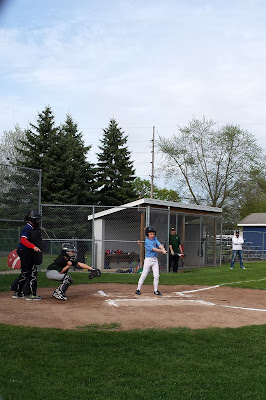 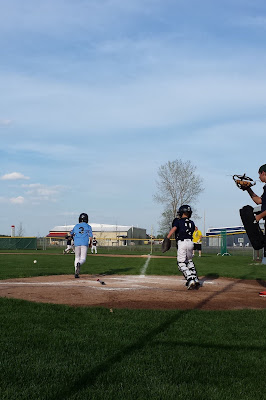 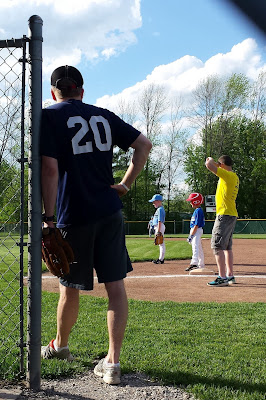 He lacked some confidence and for a while in the middle of the season, it seemed as though he stopped trying.  He would participate, he didn't complain (much), but we could tell he just wasn't giving any effort.  I talked with him a couple different times about it.  He commented that it was boring and all he did was stand there.  I agreed that, yes, compared to soccer and basketball, baseball is a slower moving game.  But I also tried to reinforce that a positive attitude (which he also struggles with, very much at times) can make the experience so much more enjoyable.  When he was discouraged because he didn't think he was good, I tried to point out that everyone strikes out.  Everyone misses the out.  Everyone has a flub.  Baseball is a persnickety game and with practice and patience, he'll improve.  Regardless of his struggles, I think he had a good time most of the time.  He did end up with a couple friends from school on his team, and he got along well with the other boys, too.  I don't think we'll sign him up again, though.  Once was enough for him, I think.  I'm thankful that he gave it a shot, that he was willing to try something new, and in the end when it didn't work out well, it leaves space and time to try again with something different {golf!}.

Drew had the best cheering section in town, too!  {Well, when they weren't distracted by other things. :) } 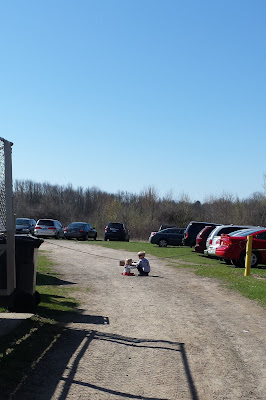 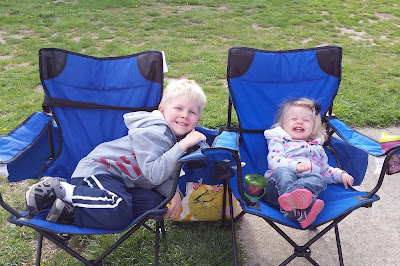 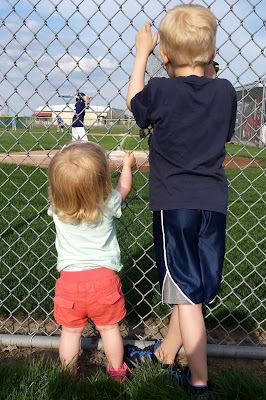 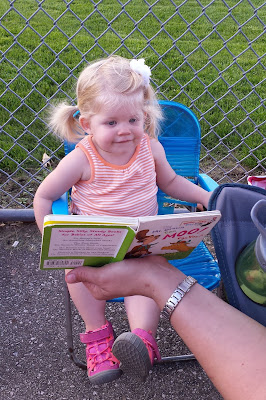