I'm not so sure this was a rite of passage for Drew as much as it was for Brad and me!  Our very first trip to the ER with one of our kids - and much to our surprise, it was Drew!  Not Reed!

So here's how it all happened...

We were finishing up at the family picnic last Sunday night, and almost everyone had already left the park shelter, when it started to rain.  It was a brief downpour, and sent the already high heat and humidity even higher.  We took shelter in the shelter to wait it out before we headed back to Grandma and Grandpa's house.  Like kids, and some adults, do, the boys eventually found themselves walking up on top of the picnic tables.

You can see where I'm going here, right?

The boys walked from on table onto another table, making a small-ish hop across the gap inbetween, when Grandpa said

The boys halted, and a short explanation on why it wasn't a very good idea ensued.  The boys, still on the second table, conceded that perhaps yes, getting down was a good idea, but not before deciding to walk back where they came from - the first picnic table via the hop over the small gap separating the two tables.

Reed walked over first.  No problem.

Drew approached the gap.  As he reached forward with one foot to hop over, his back foot slipped backward, his first foot missed the front table falling down in between the tables, and he caught himself with his chin on the edge of the picnic table.

And I saw the whole thing.

Not gonna lie.  I was terrified.  It. was. horrifying.

We ran over, grabbed him up off the ground, and I held on to his chin.  A towel was provided and a quick look determined that, yep.  Stitches required.  {Drew did cry a bit.  He should have!  But when he calmed down, whatever forces inside our brains that cause us to forget for our own good, caused Drew to not even realize he was bleeding.  I reassured him that everything was ok, but that he was going to need to see a doctor because the cut was bigger than what a bandaid could fix.  He was good with this plan, and I am amazed at how he was able to gather up all of his trust and his willpower to keep himself calm.}

By the time we were registered at the ER and taken to a room, everyone's spirits continued to lift and the humor began.  Thank goodness we all know how to laugh! 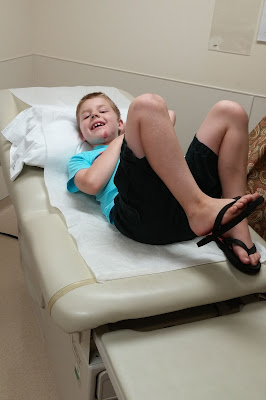 Drew was relaxed on the table, cracking jokes as we razed him.  It helps to have a smart phone on hand, too, to distract with video games.  At one point, I turned to Brad and said that we are the worst pair of parents to have to be in the ER - he can't handle blood and I'm a slobbering mess when my children are hurt and in pain.  We held it together, though!  Brad stayed upright the entire time and no kleenex for me!

The doctor cleaned up the wound (thank God for topical analgesic!) and determined that glue would suffice to close it up - much to Drew's relief!  We did our best to prepare Drew for the worst case - stitches - without causing him to have a panic attack.  Needless to say, he definitely wanted the glue!  Once Humpty was put back together again, we were released with instruction to steer clear of soaking in water for the next few days, and to stay off the tops of picnic tables for the rest of time.