Alternately titled, "It's All Brad's Fault"

One of the first things Brad told the kids upon our return from our Midwest vacation (after "I missed you!" and "I'm so glad you're home!") was "So, I think we should get a dog."

...I said, not because this was a surprise (see this post here) but because he spoke it outloud.  Into the world, for all {of the children} to hear.  He might as well have just said "We're getting a dog!" or "I got a dog!" or "A dog shall be ours!  Soon!  Like, tomorrow!"

So I guess that's that, and we got to work finding a dog!

Since Ruby's love affair with our neighbor dog, Coco, began, Brad has been online on and off again, seeking to find the perfect dog for us.  While we were looking at most of the middle-aged, good with kids dogs, we are (obviously) pretty partial to Beagles.  Every one Brad found he pointed out to me, and then for one reason or another, we'd inquire or we'd pass.  After Brad made his "let's get a dog!" declaration, we began to get really serious and starting seeing what the local shelters had available, Beagle or not.

What were we looking for?
1) Not a puppy.  We weren't against a geriatric dog, but would prefer a dog in the 2-5 year range.
2) A medium-sized dog.  Previously, I had stated that the next dog I'd like to get would be a big dog.  Right now, though, with the size of our home and the size of our yard, we wouldn't be able to accommodate one.
3) Clearly, a dog good with small children.

Other than that, we weren't too picky, but the cuteness factor certainly played a role. :)

We started at our local humane society, and found Goldo.  He was a some kind of Beagle mix (maybe Pug and Lab?) and was brought into the shelter as a stray.  We went to visit him last Friday, and we all fell in love.  He was calm and gentle and sweet and kind. 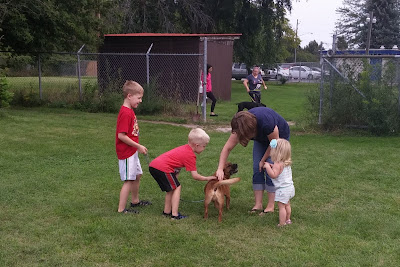 Not much of his history was available to us because of how he arrived there, but the staff informed us of the process and fees and all that we needed to know (as we've never rescued before).  The gal helping us did tell us that there is a waiting list for Goldo, and one other individual is before us on that list.  There is a required 7-day waiting period to adopt Goldo, to allow his family time to find/reclaim him.   The 7-days expire on Monday, and we would hear back then as to whether or not his family found him, the first person on the wait list decided to adopt him, or if he would be ours.

Unfortunately for us, Goldo was adopted by the first person on the list.  And many little hearts were broken.  Especially Reed's.

After we got that bummer news at the beginning of this week, and after we didn't see any other dogs suitable for us at our local humane society, Brad got serious about expanding his search a bit outside our immediate area.  In the end, he found what could be a few options for us in Genesee county (the Flint area, which is about 65 miles south of us).  He took off of work Wednesday afternoon so we could head down there to see what we could find.

Not ever having gone the rescue/humane society route before, there were a few things we were completely not smart about - namely, stopping at Genessee County Animal Control to find a dog.  Hindsight, if we had actually been thinking about the purpose of animal control facilities, I don't think we would've stopped there.  We certainly wouldn't have taken the kids with us, had we thought things through.  We didn't see any dogs being mistreated, or anything else suspect, but there were so many dogs in small spaces, it was very smelly, and very, very loud from all the barking.  I don't think we scarred our children for life, but it's just a really sad place.  Or perhaps because of the nature of the place, it's the best place to adopt from, but because there are so many animals and their main objective is not necessarily to find forever homes for these dogs, the staff isn't as connected with the animals as they are at a humane society.  Consequently, they aren't really helpful when it comes to finding a dog that's a good fit for our family.  We did happen to run into one staff member who works pretty closely with the dogs (so she said), and she was able to pick out a few she thought would be a good fit for us (mild tempered, sweet, etc) but in the end, I don't think we felt comfortable enough adopting with so many unknowns.

Onto our final stop, then, and the place where we would find our guy.  The Genesee County Humane Society was just across town, and when we arrived, we were greeted by an awesome facility.  It is clear that this shelter is well-loved and donated to, as all of the animals have ample space indoors, and although we didn't go outside to the romping grounds, I'm sure it was just as spectacular as the inside.  The very kind and helpful staff listened to what we were looking for and directed us back to see the dogs.

And in one of the very first kennels we found this little guy...

And there was a collective exclamation of joy.

The paperwork on his kennel door said that his name is "Bisquit."  He's five years old and he's been at the humane society since the beginning of June.  He was an "owner surrender" due to "too many dogs".  It also said that he is good with other dogs and with small children.

While I think we had all fallen in love at first sight, in fairness to ourselves and to the other dogs we had yet to see, we circled throughout the remaining kennels - but then decided quite quickly that Bisquit was our guy.  I could not get over the fact that he looked so much like Luci!

We returned to the front desk and asked for more information about Bisquit.  The little bit more we were told about his previous situation is that he was not, in fact, surrendered by his owner but taken from his owner.  We didn't get any other details, but our best guess is that it was a case of neglect/improper care due to the large number of animals his previous owner had.  We then asked for a "meet and greet" and we were given time with Bisquit in an enclosed room, to get to know each other.

It took all of 10 minutes for all of us to decide that he was the one. 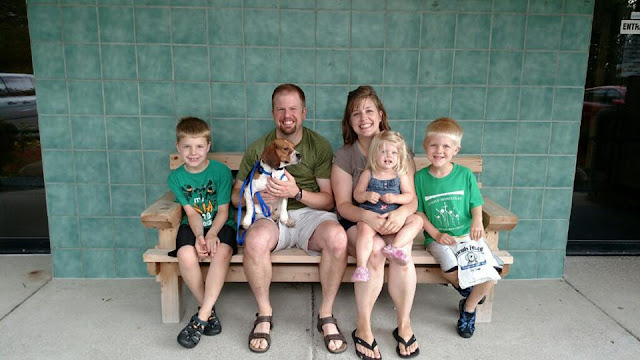 Upon committing to adopt him, we were told that his adoption fee had been covered by one of the volunteers at the shelter.  Apparently it is a mother/son duo that regularly volunteers and for a few of the dogs they've grown especially fond of, they've taken care of the fees for the families that choose them.  What an unexpected gift!  The paperwork was then started, Bisquit was fitted for his collars, and he was ours! 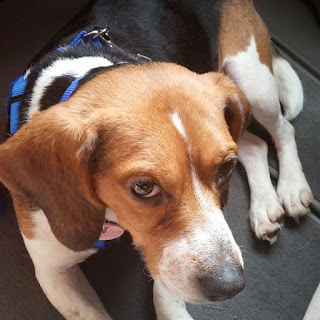 We had been talking about potential dog names for the past week, but we had to get serious as we drove home.  We aren't sure if Bisquit came into the shelter with that name or if it was given to him there, but it isn't uncommon for adoptive families to give pets a new name.  And of course, none of us could agree on anyone else's suggestion.  As far as Reed is concerned, Bisquit is his name and Bisquit he shall be.  :)  As we were driving him home, I kept referring to him as "Buddy", as there was no other name to call him yet (I myself was not a fan of his shelter name).  And it just kinda stuck. 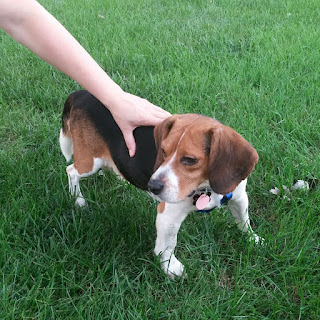 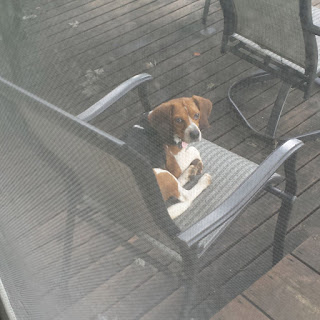 He's a tiny little thing - only 22 pounds, compared to Luci's 33 - and I'm still marveling at how similar he looks to our Luci.  We are slowly getting to know one another - he is so kind to the kids, he loves to be outside, and he loves loves loves to snuggle.  He finally starting eating yesterday after having fasted since we brought him home on Wednesday, and he's sleeping like a log in his new kennel.  He did pee a couple times in the house when we first brought him home (more reasons to have this dang carpet removed!) but nothing since.  He was heartworm positive when he was brought into the shelter back in June, and he was fully treated there, but it is something we'll have to have tested again in a few months to check up on.

I admit that when I went to bed Wednesday night, I turned to Brad and said "what have we done???"  I had been quite enjoying not having the burden that comes along with having a pet.

And there's a reason why Goldo wasn't for us.  It's because Buddy was.