Gearing Up for Halloween

Each Halloween, there are three things that I can count on to be included in our festivities (four, if I include trick-or-treating, but that's a given for most people). 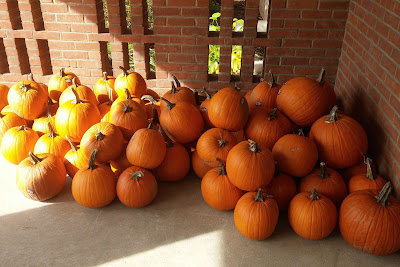 The last Wednesday before Halloween is traditionally a family night at our church (in place of our regular classes/groups that meet in the evening).  After we share a meal together (delicious), the party starts.  In the past, Brad has put together some kind of spin on a popular game show and has geared it towards family participation.  Always awesome.  Always fun.  This year, he outsourced the entertainment to Roscoe the Clown. 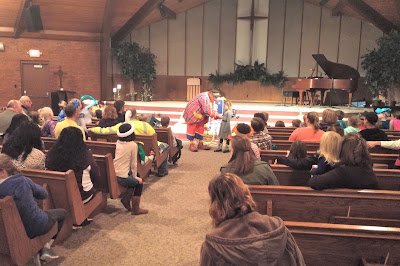 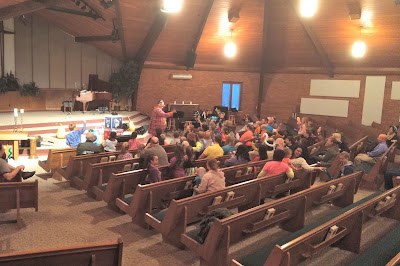 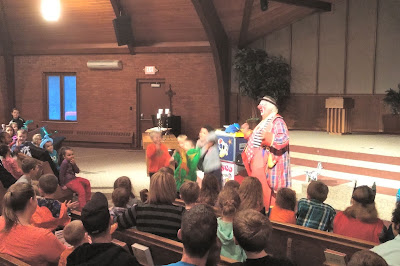 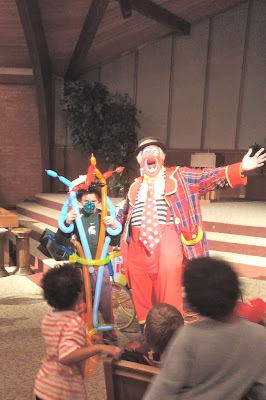 He was very entertaining, especially in the "this is so dumb!" department.
Lots of balloon fun for the kids, with a bit of magic, as well as some jokes and a hearty, hearty laugh.

When Roscoe completed his show, there were a few activities in our youth area for the kids to earn some prizes, and then to the church gym for the main event - the carving of the pumpkins!  There are always enough pumpkins for each kid to carve his own.  We came armed and ready with our patterns and tools, but quickly discovered our carvings were going to take considerably longer than the time we had to complete them Wednesday night at church.  So we cleaned up the mess we made when we took out the pumpkin guts, and decided to finish our work on another night at home.

Which brings me to item #2 on our countdown to Halloween festivities...

This was so much fun this year, most likely because (aside from cleaning out the guts, which everyone reserves special, just for me, to do) the boys are able and wanting to do it themselves.  Yay for independence!  And, we had a few extra hands as Grandma and Grandpa were visiting.

We knocked these babies out on Friday night, just in time to put them out on the front step for Saturday. 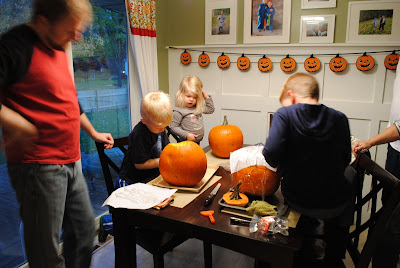 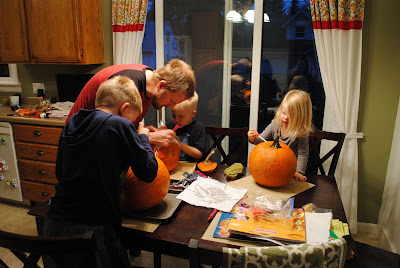 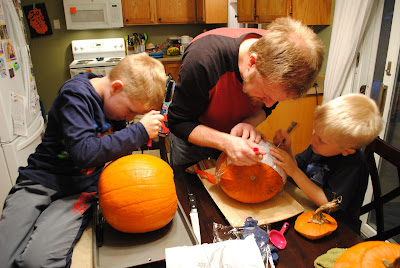 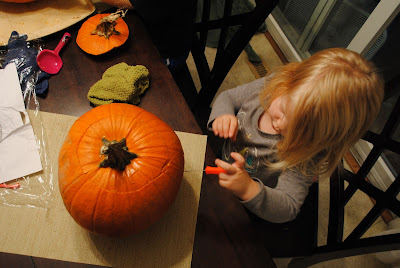 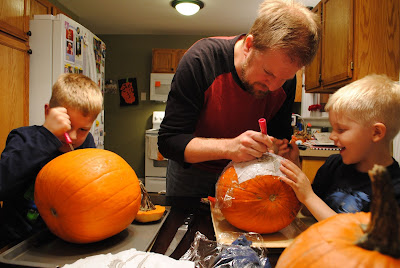 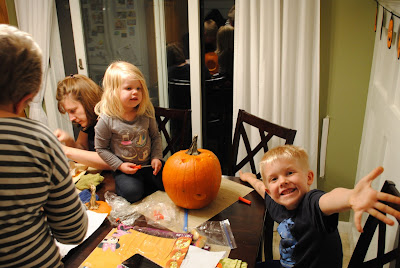 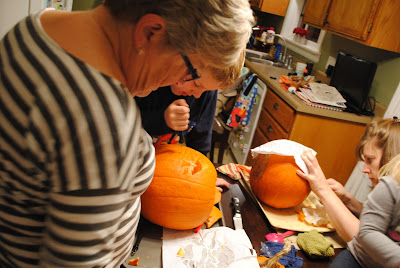 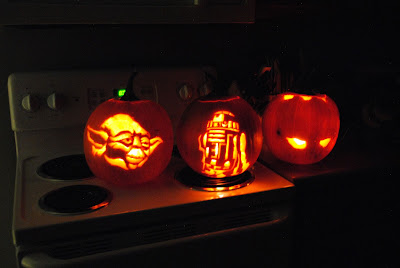 We couldn't pick easy patterns....nooooo.  ;)  Drew did do much of Yoda all by himself, with aid from Grandma on a few of the tricker portions.  And while I did do much of R2D2 because the cuts were so small and precise, Reed got his hands in there as much as he could to do the larger pieces.  And, as he was waiting on that, he and Ruby went to town on their own cooperative design, there on the right.  Classic Halloween, at it's finest.

These are definitely a highlight for the boys (ranked right behind trick or treating) but they're also pretty fun for me, too.  Just like last year, though, I have to jump back and forth between the boys' classrooms.  And this year they're on opposite sides of the school, so it leaves me really high-tailing it all over the place!  Nevertheless, I'm always happy to be there (and so far, they still like for me to be there, too).

Prior to the parties starting, the entire school has a costume parade, where they show off their costumes to everyone in the school.  This is the first time in our four years that the weather has cooperated enough for the kids to march around the school, instead of up and down the crowded hallways.  So nice!

Keep your eyes peeled for Minion Reed and Skylander Drew! 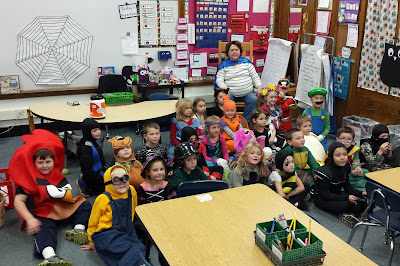 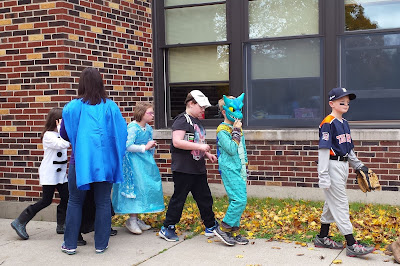 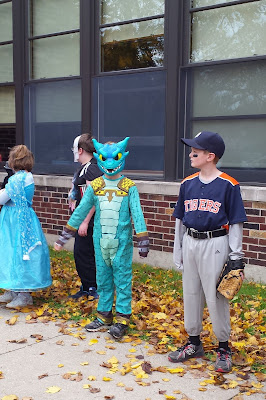 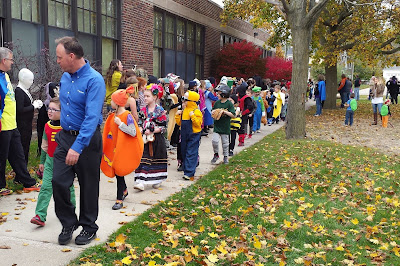 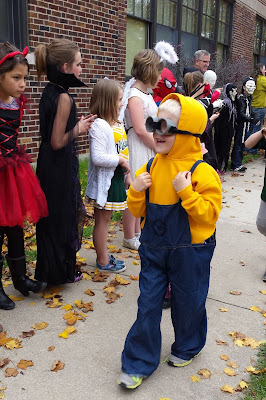 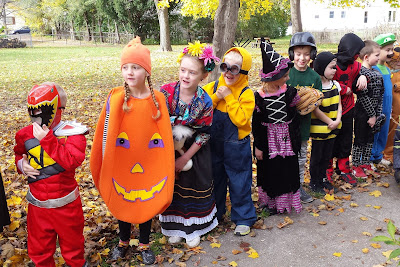 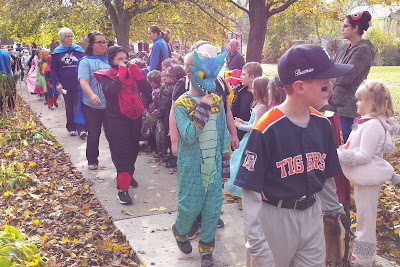 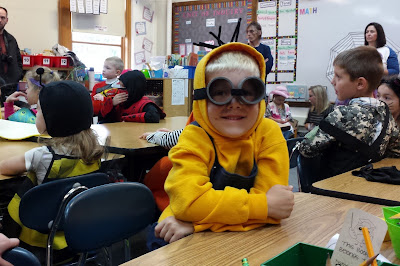 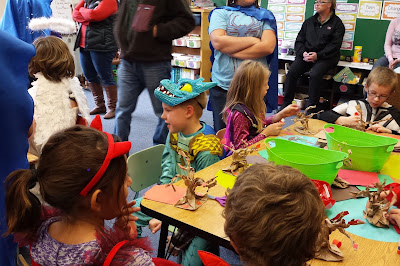 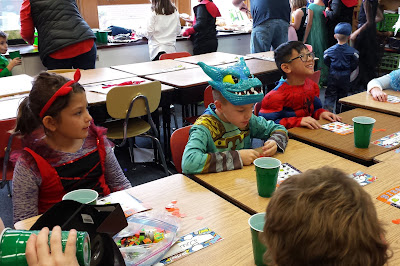 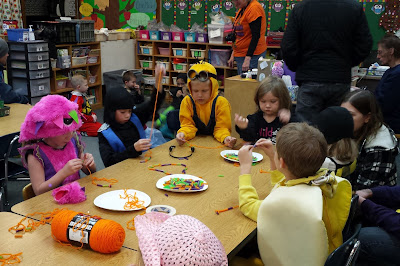 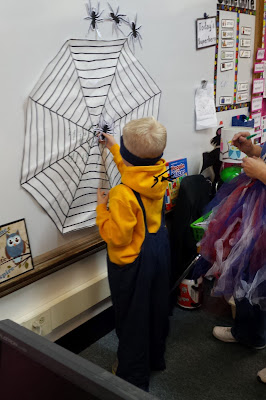 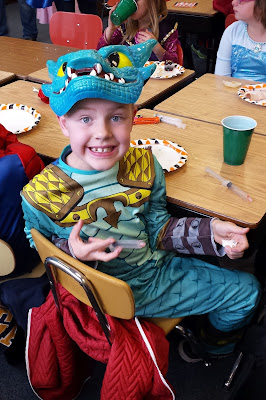 As for trick-or-treating...it was miserable.  It rained the entire time we were out, and with the rain coming down and the puddles to track through, the boys were wet up to their waists by the time we got back home.  We were able to keep Ruby at home with Grandma and Grandpa (which I was equal parts thankful for but also bummed that it was too gross outside for her to join us) and the rest of us hit up the neighborhood with our friends from up the street.  We didn't spend as much time out as we would've had the weather cooperated...but let's just say the neighborhood folks compensated for it with their generosity.

Considering the weather wasn't exactly photo-friendly yesterday, I'll take the kids outside this week (there are a couple gorgeous days in the forecast!) and take some costume pictures.  Stay tuned!