Santa Claus is Coming to Town

And Reed led the parade! 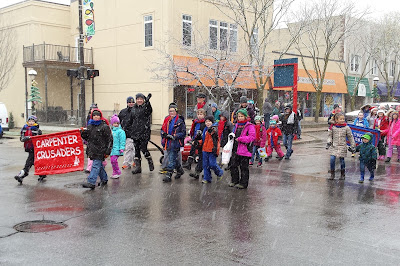 Every year, just before Thanksgiving, our town features a Santa Parade to welcome in the holiday season, which also ushers in the arrival of Santa (we have the official Santa House here, so he's welcomed back home for the holidays).  Reed joined in the festivities by walking in the parade for our school.

{Backstory:  Last fall, both boys were invited to be a part of the Everyday Heroes leadership group at school.  They were both identified as role models and leaders in their classrooms, and they then were asked to join together with the other leaders of the school to be a positive example of students who work hard and lead well.  Drew was a part of this group last year, and opted out this year (we encouraged him to give it a try again - but in the end it was his decision; and as Brad pointed out, yes, he's a great role model but he's not exactly the type to grab his baton and lead the parade (pun intended)).  Reed, on the other hand, was super excited and joined right away!  It was this group, along with the student council, that was invited to participate in the parade as representatives of our school.}

We've only lived here a couple years, but every Saturday this parade has been scheduled for, has been miserable.  And this morning fell right into line with that tradition.  It started lovely (cloudy, but dry) and then things quickly accelerated.  By the time we left the house to drop off Reed at the start of the parade, there were big, wet flakes falling from the sky. (Thus began the great debate - shoes or boots?  He'll be walking three miles so I wanted to be sure his feet were comfortable, so I thought that shoes would be the way to go.  The snow wouldn't be accumulating on the busy parade street anyway, plus I thought that his clunky boots would be too uncomfortable and perhaps hurt his feet by the time three miles were traversed.  Come to find out, boots probably should've been the way to go.  He was soaked to his waist by the time he finished the parade!  Welp.  Live and learn.)

Also, Brad's been gone since last night.  He's on an overnight with some of our youth kids, so it was just me and the littles this morning, making our way around the streets of Midland.  Parents were invited to march along with the students, and I would have had Brad been home to be with the other two, but without him here, I wasn't about to be in a three mile parade - in the snow - with all three of them in tow.  Thankfully, Reed was okay with this, and he has some great supervisors for his group, so I was okay leaving him.  My only concern was whether or not he'd make it the entire route - but, he wasn't going to have a choice!  We'd be waiting for him at the end of the parade route! 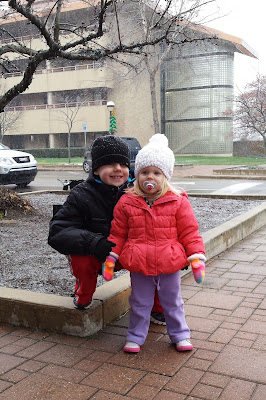 Drew, Ruby and I dropped off Reed with his group, and then proceeded to downtown where the parade concluded.  We waited for over an hour before the parade finally made it there.  We were cold!  Thankfully, the schools were near the very beginning of the parade, because by the time Reed made it to the end, we were ready to go! 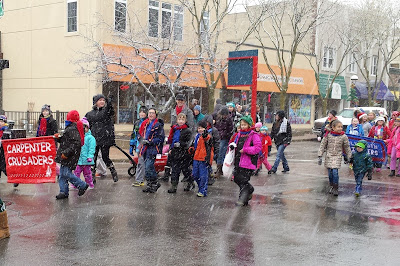 Reed made it, and had a great time.  He was wet and cold and tired, so I left it up to him how long he wanted to stay to watch the rest of the parade.  He said he wanted to stay long enough to get some candy (of course) and about five minutes later...he was ready to go!

We missed seeing Santa's big arrival....but we'll catch up with him later. :)

Now, we wait for Dad to so we can celebrate this big girl's birthday! 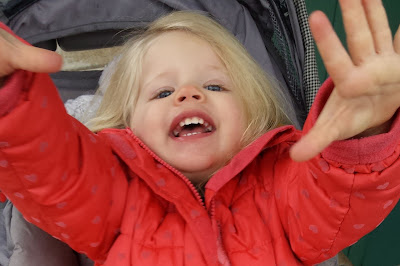